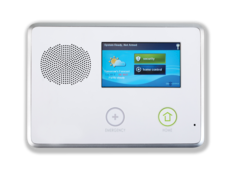 The 2GIG Go!Control-345AC2 is a version of the 2GIG GC2 System that includes a packaged 2GIG AC2 Power Supply. The prepared 10-foot cable is fixed to the transformer, and it cannot be removed. The other end is a barrel connector that plugs directly into port on the 2GIG GC2. Some users prefer this cable due to the fact that it eliminates the need for stripping wires. But the trade-off is that the user won't be able to easily extend the length of the cable if needed. However, the main objection to this system package is the fact that the GC2 is rather old and limiting in general. All things considered, we give the 2GIG Go!Control-345AC2 a 4-Star rating.

There are positive aspects regarding the 2GIG Go!Control-345AC2. By adding a compatible LTE cellular communicator, such as a 2GIG LTEA-A-GC2 or a 2GIG LTEV1-A-GC2, you can get the system monitored and connected with Alarm.com. And since the panel includes a built-in Z-Wave controller, it can really be used in almost every way that a newer and more advanced panel can be used. The prepared AC2 cable is also sometimes preferred by users, as it makes the installation process easier.

But the downsides for the 2GIG Go!Control-345AC2 should not be ignored. For one, many users find the GC2 programming process to be cumbersome and annoying. There are no encrypted sensor options for the GC2, and a user will want to go with the newer 2GIG GC2e if they are hoping to add encrypted devices. The automation controller inside the GC2 is only standard Z-Wave, which is seen as inferior to Z-Wave Plus. Again, the newer GC2e offers Z-Wave Plus capabilities. And while the AC2 cable is convenient, it cannot have its distance adjusted. Also, if the cable becomes damaged, then the entire transformer must be replaced. This is because the fixed cable cannot be detached. With these downsides in mind, the 2GIG Go!Control-345AC2 only gets a 4-Star rating from us.