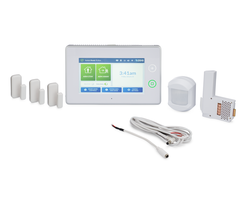 The 2GIG GC3PK-3G-A is a discontinued wireless security system kit from Alarm Grid. This kit featured the 2GIG GC3, an AT&T 3G Communicator, three (3) door/window contacts, one (1) motion sensor, and a Honeywell LT-Cable for providing power. It is no longer possible to activate the 2GIG GC3 using the communicator included with this kit. This is because Alarm.com no longer allows 3G activations, as AT&T is planning to shut down their 3G network in the near future. As a result, this is not a good kit to purchase if you are looking for a system to get monitored. However, the kit worked very well with Alarm.com before the 3G sunset took effect. And if you have one that is currently activated, it will still work well until AT&T shuts down its 3G network. At that point, you will need to replace the 3G communicator with an LTE module. Overall, the fact that this kit can no longer be activated is a serious downside. We give this product a 4 Star rating.

There are some positive aspects of the 2GIG GC3PK-3G-A. The 2GIG GC3 is an easy-to-use system that looks great mounted on a wall or positioned on a desk or table using a desk mount. The included sensors all work very well, and they will reliably alert the system to any intrusion events. The LT-Cable makes it easy to power the system. The system can still be used until AT&T shuts down its 3G network, provided that the system is already activated.

However, the downsides to the 2GIG GC3PK-3G-A are major deal-breakers for new buyers. This system can no longer be activated using the communicator included in this kit. You would need to get an LTE cellular communicator instead. The 2GIG GC3 has largely been replaced by the newer and more advanced 2GIG GC3e. We recommend getting the GC3e if you want a new 2GIG System. And once AT&T shuts down its 3G network, you will need to replace the communicator with an LTE module anyway. Otherwise the system will not work for alarm monitoring service.

The 2GIG GC3PK-3G-A was once a useful security system kit. But now it is defunct, and it has been replaced by newer, better technology. We do not recommend this kit for those who are looking to start new monitoring service. But if you have one activated, you can continue to use it for the time being. However, you should start thinking about your upgrade options sooner rather than later. You will need to either get an LTE communicator for your GC3, or upgrade to a new panel entirely. All things considered, we give the 2GIG GC3PK-3G-A 4 Stars.

Bad: Can No Longer Be Activated, GC3 Discontinued, Must Receive LTE Upgrade Once AT&T Shuts Down 3G Network