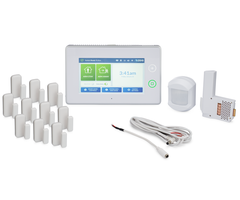 The 2GIG GC3PK10-3G-R is a discontinued security system kit from Alarm Grid. It included a 2GIG GC3 System, ten (10) door and window sensors, one (1) motion detection sensor, a Honeywell LT-Cable, and a Rogers 3G Communicator. The good thing about this kit is that it allowed for dual-path connectivity, as the GC3 has built-in WIFI, and the Rogers 3G Communicator provided important cellular backup. But this kit is no longer recommended, as the Rogers 3G Communicator can no longer be activated for monitoring service as a result of the impending 3G sunset. And once the Rogers 3G Network is shut down, any previously activated communicator will stop working entirely. That is why anyone still using this system and communicator combo should upgrade to an LTE communicator as soon as possible. Also, the GC3 itself has been discontinued, so some users may prefer to upgrade to something newer like the 2GIG GC3e, or even the 2GIG Edge that is set to be released in February 2021. With this in mind, we only give the 2GIG GC3PK10-3G-R a 3-Star rating.

There are some positive aspects regarding the 2GIG GC3PK10-3G-R. The system and sensors have a great build-quality. The kit was dual-path, though you can no longer activate the cellular communicator. It supported Alarm.com, which was great for controlling the system remotely. And the GC3 has built-in Z-Wave Plus so that you can set up an automation network around the system. But the downsides should not be ignored here. The kit is discontinued. The communicator can no longer be activated. And the communicator will stop working entire once the Rogers 3G Network is shut down. While this was once a good option for users in Canada, we can no longer recommend the 2GIG GC3PK10-3G-R. That is why we rate this product 3 Stars.