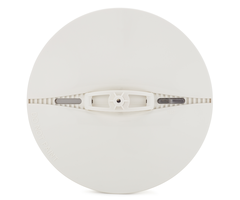 The DSC PG9916 is a wireless smoke and heat detector from the DSC PowerG Lineup. The sensor has since been discontinued in favor of the DSC PG9936. However, an existing DSC PG9916 will still work just fine. The sensor features a photoelectric smoke detector and a fixed temperature heat detector that activates upon detecting a temperature of 140 degrees Fahrenheit or higher. The device also features an 85 dB sounder to alert building occupants when activated. Overall, this is a really nice sensor with few downsides. We give it 5 Stars.

There are many things we like about the DSC PG9916. For one, it offers both smoke and heat detection. This helps it identify fires as soon as possible. The sensor supports one-go-all-go when used with other PowerG Smoke Detectors. This means its sounder will activate if other PowerG Smoke detectors are activated. This is great for ensuring that everyone on the premises is alerted to a fire. Speaking of the sounder, it is built right into the sensor, and it can produce sounds of up to 85 dB. This is loud enough for most residential locations. The sensor also provides all the benefits of a PowerG device. A PowerG Sensor can operate wirelessly from up to 2 km away from the receiver in an open-air environment when paired with certain systems. It also utilizes 128-bit AES encryption for added wireless security.

There aren't many downsides to the DSC PG9916. Its biggest downfall is that it has been discontinued, and you can no longer purchase a new model from Alarm Grid. But if you already have one, then it should still be okay. Another issue is that the heat sensor is fixed temperature only. It does not offer Rate of Rise temperature detection. Also the 85 dB sounder is pretty quiet if the sensor is going to be used in a larger location. But the one-go-all-go feature helps overcome this weakness, as the other smoke detectors on the network will also activate. This makes it more likely that everyone in the building will be made aware of a fire. Overall, the DSC PG9916 is a good sensor with few flaws. It gets 5 stars from Alarm Grid.