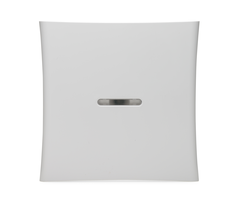 The DSC PG9920 Wireless Repeater takes the encrypted signals sent out from PowerG devices and repeats them a second time to effectively double their range. PowerG Sensors already boast a remarkable range on their own, as they can communicate from up to 2km away from certain panels in an open air environment. Placing the DSC PG9920 directly in the middle between the sensor and the panel in an open air environment can theoretically allow for up to 4km in communication range. Usually, this distance is somewhat smaller in actual practice, due to placement and obstacles that disrupt range, but it is still very far for wireless sensors. We think that the DSC PG9920 works great for its intended purpose, and we give it a perfect 5-Star rating.

There are many positive aspects associated with the PG9920. For one, it effectively doubles the range of PowerG Sensors. The module can be enrolled with your panel so that it monitors for things like AC loss, low battery, loss of RF supervision, and cover tamper. We also like the fact that the PG9920 sends out 128-bit AES encrypted signals, so any communication between the system and the sensors remains secured. The LED light on the unit is helpful for setup and troubleshooting, so that's a nice touch. And we appreciate that the device can be auto-enrolled with any system that supports PowerG Sensors.

There are not many downsides associated with the PG9920. One issue is that it is for PowerG Sensors only, which somewhat limits its use. The module is a bit on the large side, so you will need to find a good spot to put it. The backup battery for the device comes included, but it will eventually need to be replaced, so keep that in mind. But overall, we still score this product 5 Stars.