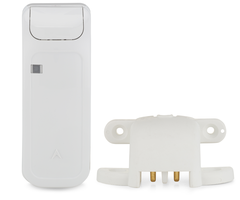 The DSC PG9985 is a PowerG Flood Sensor that works with a variety of systems, including any IQ Panel 2 Plus, any DSC PowerSeries NEO System with an added wireless transceiver, and the DSC Iotega. The device consists of a main sensor that is connected with a probe using a six (6) foot long cord. The probe itself detects leaks or floods. Only a small amount of water is needed to activate the probe, which means that the user will have more time to take action before serious water damage occurs. We think this is a great flood sensor, and we give it a 5 Star rating.

There are many reasons to like the DSC PG9985. As a PowerG Sensor, it has some of the best range and wireless security in the industry. The sensor will operate from up to 2 km away in an open air environment depending on the system it is being used with. It communicates using 128-bit AES encryption for enhanced wireless security. The probe is designed to activate upon only detecting a small amount of water, which gives the user more time to take action if a leak occurs. We must also say that the sensor has an outstanding battery life, as you will only need to change the battery every eight (8) years on average.

There aren't many downsides to the DSC PG9985. The biggest is that you need to find a good position for both the probe and sensor. The sensor is connected with the probe using its 6-foot cord, and some users may have trouble finding a good spot for both. There are other all-in-one flood sensors that have a built-in probe, and some users are known to prefer those instead. But if you want a sensor with a probe attached with a cord, then the DSC PG9985 works great. It gets 5 Stars from us.

Bad: Must Mount and Position Both Sensor and Probe