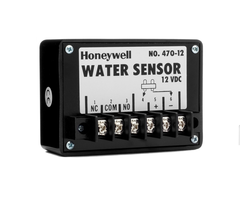 There are many things we like about the Honeywell 470-12. For one, a flood probe is already included, so you don't need any additional hardware to get started. The device allows for a long wire run between the sensor and the attached probe, which can be convenient when setting up. The device can reliably detect water when outfitted with a probe, which makes it useful for monitoring for floods or leaks. It has a great build-quality, as it is a Honeywell product. You can expect the Honeywell 470-12 to last a long time.

But there are some downsides to the Honeywell 470-12 that should be considered as well. For one, it draws a small amount of power from the panel, so you will need to take that into the load calculation. Fortunately, it is not a large amount of power. You must add a second probe if you need one, as only one probe is included with the device. But really, these downsides are relatively minor when all things are considered. Therefore, we give the Honeywell 470-12 Flood Sensor a 5 Star rating.