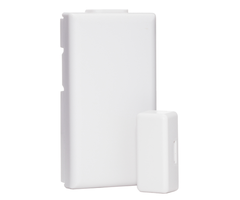 There are many things to like about the Honeywell 5811PK10 and its Honeywell 5811 Sensors. The 5811 is a thin sensor, with just a quarter-inch profile. The makes it almost vanish when placed on a white background. The sensor has a roughly 200 foot range, which makes it suitable for most homes. Keep in mind though that large metal objects and other obstacles can reduce range. We also like the fact that the sensor is easy to program and install. This makes it a good option for DIY users. The sensor is compatible with nearly all 345 MHz security systems.

However, there are some downsides regarding the Honeywell 5811PK10. For one, it is discontinued, so you will be unlikely to find a new pack anywhere. The 5811 has been replaced by the Honeywell 5800MINI, which is an even smaller sensor. Like any wireless sensor, the Honeywell 5811 relies on a battery, and the battery must be replaced about every four (4) years. The sensor uses a CR2032 coin battery, and that could mean a trip to the pharmacy to pick one up if you are not prepared.