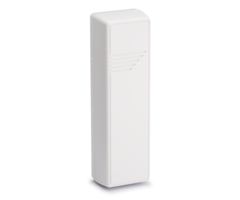 The Honeywell 5819WHS is a discontinued shock sensor and wireless transmitter. The wireless device operates at 345 MHz, so you can use it with compatible wireless alarm systems that support the frequency. This includes many systems from Honeywell and 2GIG. The device uses three (3) separate Loop Numbers, with Loop Number 1 being the device's built-in shock sensor, Loop Number 2 being for the device's internal reed switch that allows the 5819WHS to function as a contact sensor, and Loop Number 3 being for the sensor's wireless transmitter capabilities. With the transmitter, you connect a wired NC contact sensor to the 5819WHS so that it can be used with your 345 MHz alarm system. As the 5819WHS has so many features and great functionality, we give it a 5-Star rating.

As mentioned already, the 5819WHS offers many features and capabilities, which has to be seen as a positive aspect. Unlike earlier models the shock sensor for the 5819WHS is built inside the unit. It's not a mere shock processor where you have to connect a wired unit. We also like how the unit has a selectable response time that is adjusted using its internal DIP switches. You can also adjust the sensitivity for the device, which is great for enhanced customization. There are not many downsides for the 5819WHS, but one shortcoming is the fact that the sensor is discontinued, and you probably won't find a new model anywhere. While the sensor has three (3) programmable functions, you will need to assign the device to three different zones on the system if you want to use all these functions. Also, no magnet is included with the sensor, so you must supply your own if you want to use the device as a contact sensor. All things considered, we give the 5819WHS a 5-Star score.