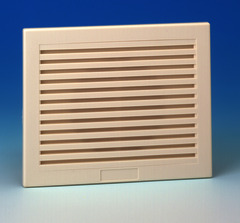 There are positive aspects regarding the Honeywell 746. For one, it is rather compact in size, so it won't take up too much space. The voice coil is double-coated with polyurethane to prevent corrosion. Despite its small size, it can still produce some loud sounds when set up properly, as its maximum power output is 20 watts. Mounting hardware for the speaker comes included, so you should have no trouble setting it up. The device is relatively easy to mount. And like most Honeywell products, the Honeywell 746 has a great build quality, so it can be used reliably for many years.

But the lack of a siren driver is a big downside here. This is why many people will choose to buy a legitimate siren rather than a speaker and a siren driver separately. It does force us to knock a star off the rating. There is also the fact that this speaker is built for indoor use only. All things considered, we give the Honeywell 746 a 4-Star score.

Bad: No Siren Driver, Indoor Use Only