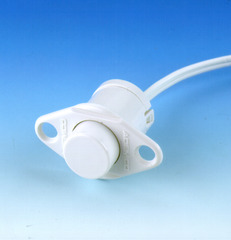 The Honeywell 955PS is a hardwired recessed plunger switch contact that lets a system know when a door or window has been opened. When the door or window is closed, the plunger switch will remain pressed down. Once the door or window is opened, the switch will pop open, and the sensor will know to alert the system. This plunger switch uses wired leads instead of screw terminals. Using wired leads over screw terminals isn't really a positive or negative aspect, but it may be preferred or undesirable depending on the installer. The switch has a 3/4" diameter, and an appropriate hole will need to be drilled. However, there is a big downside to this sensor. That downside is that this sensor is not a rolling plunger switch. Some users may find that doors sometimes get caught on non-rolling recessed plunger switches, which can prevent the door from fully closing. There are plenty of other hardwired rolling plunger switches available, and most users will generally find that they provide better performance. For that reason, we only give the Honeywell 955PS a 4-Star rating.

There are some positive aspects regarding the Honeywell 955PS. As a wired door/window sensor, it does not use any batteries, and the sensor will not draw any power from the panel. Assuming that the switch does get fully pressed in when the door or window is closed, you should find that it accurately lets the system know about a door or window that has been opened. And since this is a recessed sensor, it will remain hidden when the door or window is closed. But the downsides for the sensor must also be considered. The fact that a door can get caught on this sensor is pretty disappointing, and we generally try to steer users towards rolling plunger switches for that reason. This sensor is best used on sliding doors, that don't swing closed. There is also the fact that you need to drill a hole to install this sensor, and you need to wire it to your panel. Lastly, this sensor is discontinued, and it can no longer be purchased new. We give this product a 4 Star rating because it lacks the reliability of a rolling plunger switch.

Good: No Batteries, No Power Draw, Works Reliably When Pressed Down Fully, Hidden from View

Bad: Not a Rolling Plunger Switch, Door Can Get Caught, Must Drill Hole to Install, Must be Wired to Panel, Discontinued