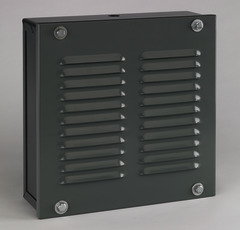 The Honeywell AB12M is a 12VDC motorized bell. When 12 volts of power is provided to the bell, the internal clapper will begin hitting the bell and producing 90 dB of noise. This is good for alerting anyone in a smaller building to an alarm on the system. The Honeywell AB12M is a rather low-tech device, but it gets the job done if you are looking for a simple sounder for your system. We are also very impressed with its build quality and overall performance. There really aren't many bad aspects regarding the Honeywell AB12M, so we can give it a 5 Star rating.

There are many things to like about the Honeywell AB12M. For one, it has a low current draw of just 100 mA at 15VDC. This means you should be able to add multiple bells to your panel without issue. We also appreciate the heavy duty steel box that provides ample protection for the inner bell. It even features two separate tamper switches to alert the system if someone tries to damage or remove the device. The Honeywell AB12M really has an exceptional build quality that we can't help but appreciate.

But there are still some downsides to the Honeywell AB12M. For one, it can only produce sounds of up to 90 dB. This might be too quiet for some users. Also it is a very low-tech device, as it is literally just a mechanical bell inside a box. Many users prefer something more intricate, namely a real siren with a built-in driver. But if you can overlook these weaknesses, then this is a really good device to consider. It is perfect for anyone looking for a simple bell sounder for their system. We give it 5 Stars.