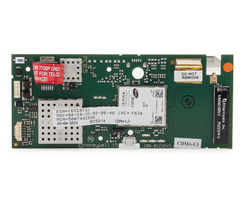 The Honeywell CDMA-L3 is a discontinued cellular communicator for a Honeywell L3000 LYNX Plus Security System. This cellular communicator was able to be activated for connectivity with the Verizon CDMA Cellular Network. But with the news that Verizon is shutting down their CDMA Network in favor of their newer and better LTE and 5G Networks, it is no longer possible to activate a Honeywell CDMA-L3 for monitoring service.

But if you have a Honeywell CDMA-L3 that has already been activated, then it will continue to work until Verizon shuts down the network permanently. Also understand that if you deactivate the module for any reason, it cannot be reactivated. Anyone using a Honeywell CDMA-L3 with their LYNX Plus System for monitoring is encouraged to update to an LTE communicator like the Honeywell LTE-L3V as soon as possible. As we can no longer recommend using the Honeywell CDMA-L3, we can only give it a 4 Star rating.

There are positive aspects regarding the Honeywell CDMA-L3. For one, if the unit has been previously activated, then it will continue to work until Verizon shuts down the associated CDMA Network. The unit allows for connectivity with Total Connect 2.0, provided that the user has an appropriate alarm monitoring plan. Since this is a cellular communicator, it provides extremely reliable connectivity with the Resideo AlarmNet Servers.

Bad: Can No Longer Be Activated, Network Being Shut Down, Discontinued