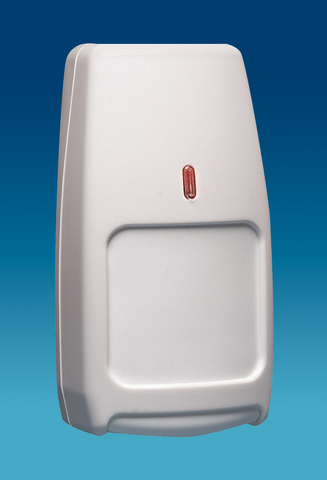 The Honeywell IS2560 is a discontinued hardwired PIR motion sensor that offers a larger-than-average coverage area of up to 60 feet by 85 feet. It is a fairly standard motion sensor, as it connects with a wired panel using a 4-wire connection. Two (2) wires are for zone status, and the other two are for power. There are even four (4) different sensitivity level options for added customization based on the needs of the end-user. Despite this being a relatively old sensor, it still works great, and it is still used in many situations. For that reason, we give the Honeywell IS2560 a 5-Star rating.

There are many things to like about the Honeywell IS2560. For one, it offers a rather large coverage area, making it more suitable for industrial or commercial locations. Specifically, the sensor covers up to 60 feet by 85 feet, so plan accordingly. By using sensors with a larger coverage area, you will likely require fewer sensors for your installation, thereby saving you some money. There is an LED light on the sensor, which is good for testing purposes. The sensor has a look-down zone for added coverage. And you can choose between four different levels of sensitivity to meet your needs. We also really like the fact that this sensor has an EOL terminal that allows you to more easily add a resistor for supervision purposes. The end-of-line resistor is connected to the common terminal and the aforementioned EOL terminal. One side of the zone wire is also connected to the EOL terminal. This prevents the need for soldering or using wire nuts or B-connectors.

There are not many downsides regarding the Honeywell IS2560. Like any wired sensor, you will need to run a wire from the device to either the panel or a wired to wireless converter. If you have trouble wiring sensors, then this is something to keep in mind. Also, the Honeywell IS2560 does not offer any pet immunity, so that might a problem if you intend on using this sensor in a home with a dog, cat, or other small animal moving around. With its large coverage area, the sensor was mostly built with commercial or industrial use in mind, so it's not much of a surprise that a pet immunity feature was not included. Lastly, the Honeywell IS2560 is discontinued, and you cannot buy it new. But if you find a used model, then it should still work fine. Overall, we give the Honeywell IS2560 a 5-Star score.