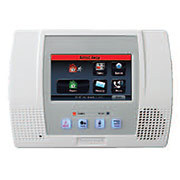 The Honeywell L5000-SIA is the version of the L5000 System that is compliant with the Security Industry Alliance (SIA). It is basically the same as an L5000 System, except that certain programming settings must be enabled by default or cannot be adjusted, per regulations mandated by the SIA. This system can be more or less treated as an L5000 System, and all the problems that apply to that system also apply to L5000-SIA. The L5000-SIA was the first attempt by Honeywell at a wireless touchscreen alarm system, and there were many challenges that came with such an ambitious project. Many of the issues that came with the L5000 were not corrected until Honeywell released the L5100 later on. While the L5000 and L5000-SIA were extremely innovative for their time, we are giving the L5000-SIA a 3 Star rating due to its numerous issues.

Starting out with the positives, the L5000-SIA features a wireless touchscreen with menus that are easy to navigate. You can auto-enroll sensors from the Honeywell 5800 Series, which is pretty convenient when you consider older methods for enrolling sensors. We also want to give the system respect for being the first of the Honeywell LYNX Touch lineup, which would later become one of the most successful alarm system lineups ever.

But there are plenty of downsides to the L5000-SIA. The panel was prone to numerous electrical issues, some of which could destroy the entire system. The only way to connect the system to AlarmNet360 and Total Connect 2.0 is to use a Honeywell ILP5 internet communicator, which will allow you to use a hardwired ethernet connection with the system. There is no way to do WIFI with the system. The only cellular communicator for the system, the Honeywell GSMVLP5, connects with a 2G network, which has been shut down. And you cannot do Z-Wave home automation with the system. There are just too many limitations associated with the L5000-SIA for it to receive a great rating. We can give it 3 Stars, and hopefully that's enough to convince you to get a more robust system, such as a Honeywell Lyric or a Qolsys IQ Panel 2.

Bad: No WIFI, No Cellular, No Z-Wave, System-Breaking Electrical Issues