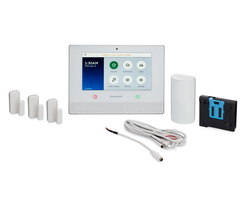 The Honeywell Lyric Verizon-CDMA 3-1 Kit is an old security system kit sold by Alarm Grid. The kit included a Honeywell Lyric Alarm System, three (3) VERSA-2GIG Contacts, a Honeywell SiXPIR Motion Sensor, a Verizon CDMA Communicator, and a Honeywell LT-Cable. Other than the Verizon CDMA Communicator, everything included in this kit is still top of the line and can be used very effectively. And if you already have the communicator activated, then it can continue to be used until Verizon eventually shuts down their CDMA Network. But since we really like the Lyric System and the included sensors, we can still give this 5 Stars.

The Lyric is a great system, and it offers pretty much everything you would expect out of a modern system. It has 128 wireless zones, built-in Z-Wave, integrated WIFI, and a beautiful touchscreen. The sensors included with this kit are simple, yet effective. They are all easy to enroll, and you can program them according to your unique needs. As an added bonus, the SiXPIR Motion Sensor utilizes 128-bit AES encryption for added wireless security. And the Honeywell LT-Cable is a nice addition, as it makes installing the system even easier. We also want to mention that even though the Verizon CDMA Communicator can no longer be activated, the Lyric System can still be used for IP-only with no added equipment.

The main downsides from this kit concern the fact that it has a very outdated communicator. The Verizon CDMA Communicator can no longer be activated for monitoring service. Making matters worse is that if you have one that is already activated, then it will stop working once Verizon shuts down their CDMA Network. You will want to upgrade to LTE as soon as you can. Fortunately, LTE modules are readily available. Overall, we are big fans of the Lyric System. If it weren't for the CDMA Communicator, we would strongly recommend this kit. But luckily, we have some Lyric Kits with LTE modules available for purchase instead. Still, this doesn't stop us from giving the Honeywell Lyric Verizon-CDMA 3-1 Kit a 5 Star rating.