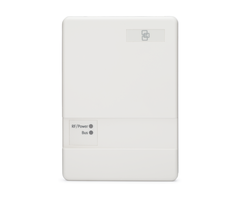 There are many things we like about the Interlogix 80-922-1. For one, it can effectively double the range of 319.5 MHz sensors. The device works reliably in repeating signals, and it requires very little maintenance. The unit is very easy for a DIY user to set up on their own. And since it is a plug and play device, you do not need to program it to the panel. It will start repeating signals as soon as you install it. LED lights on the unit provide the current status, and they can be useful for troubleshooting.

But there are some downsides to the Interlogix 80-922-1 that should be considered. While it can repeat Qolsys S-Line Sensors, it will do so without the S-Line rolling code encryption. The repeated signal will just be a non-encrypted 319.5 MHz signal. Also, the included transformer for the unit is minimal at best. End users have expressed difficulty and confusion when wiring the transformer for proper polarity. Also, we have noticed a blatant misspelling on many of the transformers, as it says "AC Adatpor". But these flaws are relatively minor, and they do not stop us from giving the product 5 Stars.