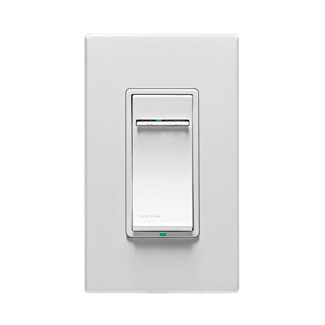 The biggest positive to the Leviton VP00R-1LZ is that it allows for a multi-pole wiring configuration, in which multiple switches can control one lighting load or one ceiling fan load. The device features an LED light indicator to assist with the process of pairing to a coordinated dimmer module. We can also say that the Leviton VP00R-1LZ is easy to use and install, making it good for DIY users.

But the downsides to the Leviton VP00R-1LZ are pretty severe. First, it is not an actual load bearing device. You can only use it alongside Leviton devices that are load bearing. You will need a traveler wire to make a setup involving the Leviton VP00R-1LZ possible. The device only uses standard Z-Wave, meaning you won't get the benefits of Z-Wave Plus with this device. We recommend finding newer, more advanced Z-Wave Plus devices for your smart lighting setup if you are just getting started. Using more powerful and robust devices will provide you with greater flexibiltiy in the long run. Additionally, this device has been discontinued, and it can no longer be purchased new. Because of these downsides, we give the Leviton VP00R-1LZ 4 Stars.