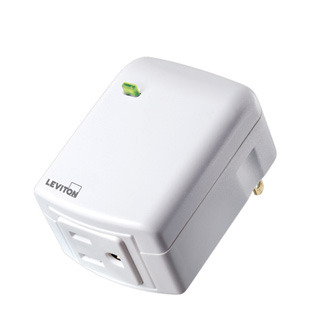 The Leviton VRP15-1LW is a discontinued Z-Wave plug-in module that supports a maximum power load of 15 amps. It can be used with a variety of devices including, lamps, portable fans, kitchen appliances, indoor fountains, and more. By enrolling this device with your Z-Wave hub, you will be able to control the connected device remotely using a compatible interactive automation platform. Some examples of interactive automation platforms are Total Connect 2.0 and Alarm.com, which are both frequently used with security systems. The device is easy to use, as you just plug it in and pair it with a Z-Wave hub. However, it is bulky, and it will cover up multiple outlets on a power strip. We also don't like the fact that this is a classic Z-Wave device, rather than a Z-Wave Plus device. All things considered, we give the Leviton VRP15-1LW a 4-Star rating.

There are positive aspects regarding the Leviton VRP15-1LW. For one, the module is extremely versatile, as it can support many types of home appliances and allow them to function as smart home devices. Devices can be controlled locally at the unit, from the Z-Wave hub or controller, or remotely from a compatible interactive service platform, such as TC2 or ADC. We love the fact that the device is extremely easy to use. No wiring is required. You just plug it in, and pair the module with the Z-Wave hub. Then connect an electrical appliance that uses 15 amps or less, and start using it with your smart home network. An LED light provides current status.

But there are also some downsides to the Leviton VRP15-1LW. The biggest downfall is that the device is Z-Wave classic, not Z-Wave Plus. This is important if you are pairing the device with a Z-Wave Plus controller, as you won't experience the optimal wireless range of Z-Wave Plus. We also don't like the fact that the device is a rather bulky plug-in module. If you use it on a power strip, then it will cover up multiple outlets. And if you use it on a standard wall outlet, then make sure to place it on the bottom so that it doesn't cover up the other outlet. Also, the unit is discontinued, so you are unlikely to find a new model, and you cannot purchase it from Alarm Grid. All things considered, the Leviton VRP15-1LW gets a 4-Star score from Alarm Grid.