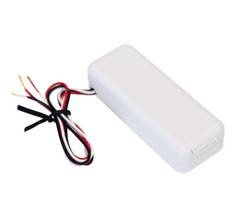 The Qolsys IQ Doorbell is a 319.5 MHz doorbell sensor that is used with alarm systems that support the 319.5 MHz frequency. Compatible systems include the original Qolsys IQ Panel 2, the 319.5 MHz Qolsys IQ Panel 2 Plus, and the Interlogix Simon Alarm Panels. The Qolsys IQ Doorbell is installed in-place of a user's existing doorbell, and it is learned-in with a system once proper power has been provided. By pressing the doorbell, you will get a zone fault at the panel to serve as an alert. And if your system is monitored for use with Alarm.com, then you can also have Alarm.com send you text and/or email alerts regarding the activated doorbell. Overall, this is a fine doorbell device for a security system, and we give it a 5-Star rating.

There are many things to like about the Qolsys IQ Doorbell. For one, it's very convenient for receiving text and/or email alerts from Alarm.com when someone is at your door. It can use the existing wiring of an old doorbell, which minimizes the set up process. The IQ Doorbell can also be used as a trigger to activate other devices, such as your smart lights. We also appreciate the fact that the IQ Doorbell is suitable for use outdoors, which is where most doorbell devices are used. Lastly, the IQ Doorbell will work with the chime of the existing doorbell, which is essentially the main function of the device.

There are some downsides regarding the Qolsys IQ Doorbell. It will need to be installed, and while the process is generally quite easy, it's still a minor inconvenience. Some users may prefer to get a doorbell camera instead of the Qolsys IQ Doorbell, due to the fact that a doorbell camera will provide better opportunities for checking-in on your home. There is also the fact that the Qolsys IQ Doorbell has been discontinued, and you are unlikely to find it new. But if you come across a used model, then it should still work just as well. While the IQ Doorbell might be a bit of an old-school device, it still works well for its intended function. It gets a 5-Star score from Alarm Grid.

Bad: Must be Installed, Not as Feature Heavy as Doorbell Camera, Discontinued