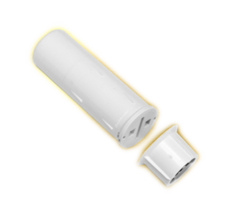 Good Sensor, But There Are Other Options
Submitted on 08/07/2019 Alarm Grid

We generally like the Qolsys IQ Recessed Door-S, but there are sometimes better options available. The first thing to note is that this is a recessed contact sensor. That means the sensor will be hidden inside the door or window frame. This is good for users who want to have their sensor hidden from outside view. However, a recessed sensor will require that a hole is drilled into the door or window frame. You will also need to drill an accompanying hole in the door or window itself for the magnet. Not every user is going to want to drill holes, so some users are best off buying a surface-mounted sensor instead. Our technicians find that installing the Qolsys IQ Recessed Door-S is pretty easy, but a surface-mount sensor will be even easier to install.

If you do need a recessed sensor, then the Qolsys IQ Recessed Door-S is a pretty good choice if you have a 319.5 MHz system. Some 319.5 MHz systems include the original IQ Panel 2 System, the Interlogix Simon Alarm Panels, and the 319.5 MHz version of the Qolsys IQ Panel 2 Plus. The biggest selling point of this sensor is its S-Line Rolling Code Encryption. This feature prevents the sensor from being hacked or taken over by potential intruders. However, the sensor will only utilize the S-Line Encryption with the original IQ Panel 2 and the 319.5 MHz version of the IQ Panel 2 Plus. On all other systems, including the Interlogix Simon Panels, the sensor will behave as a non-encrypted 319.5 MHz sensor.

If you have a 319.5 MHz system other than the IQ2 or IQ2+, then you are actually better off buying the Interlogix TX-E221 instead. The TX-E221 is basically the same recessed sensor, but without the S-Line Rolling Code Encryption. Since only the original IQ2 and 319.5 MHz IQ2+ can use the S-Line Encryption, there is no reason to buy the IQ Recessed Door-S if your panel cannot support it. Meanwhile, if encryption is important to you, then there might be a recessed sensor that offers even better protection. The DSC PG9307 PowerG Recessed Contact uses 128-bit AES encryption, which is considerably more secure than the rolling code encryption used by the S-Line Sensors. The DSC PG9307 will work with any PowerG-compatible system, including ALL versions of the IQ Panel 2 Plus. With that in mind, the IQ Recessed Door-S is only the most secure recessed sensor for the original IQ Panel 2, a system which has since been discontinued.

Bottom line, the Qolsys IQ Recessed Door-S is a good sensor, but it isn't always the best option. If you don't want to drill holes in your door or window frame, go with a surface mount contact like the VERSA-GE. If you don't care about encryption, save a few dollars and go with the Interlogix TX-E221. If you have a PowerG-compatible system and you want a more secure sensor, go with the DSC PG9307. The IQ Recessed Door-S is really only the best sensor if you have an original IQ Panel 2. The sensor is also a good option if you have a 319.5 MHz version of the IQ Panel 2 Plus, and you want some level of encryption, but you don't need the ultra-secure 128-bit AES encryption of a PowerG Sensor.