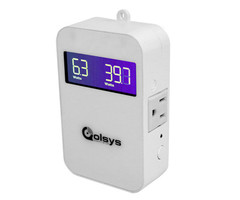 The Qolsys IQ Smart Socket is a discontinued plug-in socket that uses classic Z-Wave technology. By plugging this device into an outlet and pairing it with your Z-Wave network, you can gain smart control for the connected devices. There are two (2) controllable outlets on the Qolsys IQ Smart Socket, and you can control them independently of one another. This makes it very useful for controlling connected devices the way you want. Unfortunately, the device has been discontinued, and it is largely seen as outdated for not using Z-Wave Plus technology. But it was still very good for its time, and some users with classic Z-Wave controllers still continue to seek it out. We give the Qolsys IQ Smart Socket a 5-Star rating.

There are many things to like about the Qolsys IQ Smart Socket. The fact that the two (2) controllable outlets operate independently of one another is a major benefit, as it gives you greater flexibility in controlling the device. The LCD screen on the Qolsys IQ Smart Socket provides wattage information for both of the connected devices. This can be very useful in ensuring that you do not exceed the maximum allowed power load. There are also LED lights on the unit that are good for verifying power and general troubleshooting. We like the fact that there is a slot for an outlet screw to help you secure the plug-in module to an outlet.

There are some downsides for the Qolsys IQ Smart Socket. For one, the device is discontinued, and it can no longer be purchased new. Although the outlets can be controlled independently, only one outlet (No. 1) can be controlled using Z-Wave technology. The other outlet can only be toggled ON/OFF locally at the device. The fact that this device uses classic Z-Wave technology is also seen as a downside, as it will not have as far of a range as a Z-Wave Plus device when paired with a Z-Wave Plus controller. But these downsides are relatively minor, and they do not stop us from giving the IQ Smart Socket a 5-Star score.