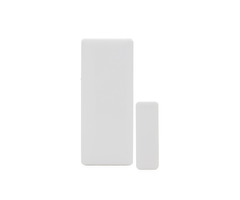 PG9975/PG8975/PG4975
PowerG Series Wireless Door and
Window Contact Installation
Instructions
Operation
The PG9975/PG8975/PG4975 Door and Window Contacts are
fully supervised, PowerG magnetic contact devices. They
include a built-in reed switch (that opens upon removal of a
magnet placed near it). The device transmits alarm notifications
to the control panel and is supervised using the PowerG 2-way
communications protocol. The LED lights green/yellow/red,
according to signal strength, upon first insertion of the battery
and for the test period of 15 min. LED does not light while a
supervision or alarm message is being transmitted. Operating
power is obtained from an on-board 3 V Lithium battery. Built-
in link quality indicators reduce installation time by eliminating
the need for the installer to
physically approach the control
panel.
Note:
For UL/ULC installations use this device only in con-
junction with compatible DSC wireless receivers:
HSM2HOST9, HS2LCDRF(P)9, HS2ICNRF(P)9 and PG9920.
Low-Battery Detection
The PGx975 includes low-battery condition detection. When
this condition is detected a trouble
message is transmitted to the
compatible receiver/control panel. This will provide visual
identification of the unit that requires a battery change.
Device Setup
CAUTION!
This product uses Lithium Batteries. Improper handling of lith-
ium batteries may result in HEAT GENERATION, EXPLO-
SION or FIRE, which may lead to personal injuries.
WA R N I N G !

DANGER OF EXPLOSION IF BATTERIES ARE
INSTALLED INCORRECTLY. REPLACE ONLY WITH THE
SAME OR EQUIVALENT TYPE RECOMMENDED BY
THE MANUFACTURER. DISPOSE OF USED BATTERIES
ACCORDING TO THE MANUFACTURER'S INSTRUC-
TIONS
KEEP AWAY FROM SMALL CHILDREN: IF SWAL-
LOWED PROMPTLY SEE A DOCTOR.
Do not try to recharge these batteries.
Note:
Installation and battery replacement should be done by
service persons in indoor non-hazardous locations only.
Note:
To ensure the continued operation of all wireless devices
after performing a system default, a global upload of all wire-
less programming via DLS is recommended before defaulting
the system. After completing the system default, download the
wireless programming.
Legend
A. Enroll button
B. Battery Polarity
C. Reed switch on underside of PC Board (in unit)
D. Symbol on side of the case indicates location of reed
switch
E.
Magnet
F.
1/4" space maximum (6mm)
G.
Back Tamper break-away base segment (PG8975 only)
H. Mounting holes
Installing the battery
1.
Insert a 4 mm flat screwdriver into the slot of the plastic
cover, and flex the slot to open that side of the plastic
cover.
2.
Insert the screwdriver into the slot on the other side of the
plastic cover and repeat the
procedure, and then remove
the cover.
3.
Insert the battery at an angle
while observing battery
polarity and then press down
on the battery.
Note:
When manually program-
ming wireless devices, if a device
has been powered up for more
than 48 hours it cannot be
enrolled into the system until the
device has been tampered and
restored. When programming the
panel using the Quick Enroll procedure follow the steps
detailed in Enroll the Device into the System.
Note:
After restoring a low battery trouble the system may take
up to 5 minutes to clear the trouble.
Enroll the Device into the System
To quick enroll:
1.
On a keypad press [*] [8] [Installer Code] [804] [000].
2.
Press and hold the device enroll button until the LED lights
steady and then release the en
roll button while the LED is
still lit. A confirmation message
then appears on the key-
pad.
3.
Press [*] key to confirm ID.
4.
Enter [3 digit zone #].
5.
Enter [3 digit zone type].
6.
Enter [1 digit partition #] for all desired partitions and
press [#]. If using an LCD keypad you can scroll to the
desired partitions and press [*] to toggle the partition.
7.
On an LCD keypad enter the label by using word library.
To pre-enroll:
1.
Remotely configure the unique ID number into the system.
For more information see the HSM2HOST manual.
2.
When on-site, press the device enroll button.
Note:
If the wireless device has been powered for more then 48
hours without being enrolled, tamper and restore the device to
enroll it.
Mounting the Device
It is highly recommended to attach the transmitter to the top of
the door/window on the fixed frame and the magnet to the door
or window. Ensure that the magnet is located not more than 6
mm (0.25 in.) from the transmitter’s marked side.
Placement Testing
Before permanently mounting any wireless device, temporarily
mount the device and perform a placement test.
1.
Tamper the device by removing the cover.
2.
Replace the cover to restore the tamper.
3.
Trip the device by opening the door or window and verify
the red LED blinks, indicating detection.
4.
After 2 seconds the LED blinks 3 times.The following
table indicates received signal strength.
IMPORTANT!
Only GOOD or STRONG signal strengths are
acceptable. If you receive a POOR signal from the device, re-
locate it and re-test until a GOOD or STRONG signal is
received.
Note:
For UL/ULC installations, only STRONG signal levels
are acceptable. After installation verify the product functional-
ity in conjunction with the co
mpatible receivers HSM2HOST9,
HS2LCDRF(P)9, HS2ICNRF(P)9 and PG9920.
Note:
For detailed placement instructions refer to the control
panel Reference Guide.
Gap Separation
Note:
For EN50131-2-6 compliant installations use contact and
magnet only for axis X movement when installed on metallic
(ferrous) materials.
Mounting Procedure
Note:
Adhesive tape not to be used for EU Market.
For
PG4975 and PG9975
:
1.
Peel away the release liners from the two strips of double-
sided adhesive tape and attach to the device and magnet.
2.
Align the device with the magnet according to the location
marks and fasten the device and magnet to the mounting
surface.
For