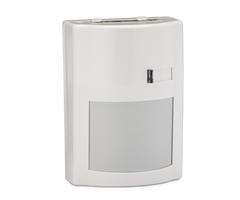 The DSC AMB-300 is an addressable PIR motion sensor that provides coverage for a residential area. The sensor supports multiple types of lenses that adjust its coverage area. It uses multi-level signal processing to accurately detect human intruders. Purchase the DSC AMB-300 from Alarm Grid.

The DSC AMB-300 Addressable PIR Motion Detector is used for monitoring a standard room for motion. The device uses a multi-beam lens design and multi-level signal processing to accurately the IR energy signature of a human intruder. The device connects with an addressable 2-wire connection.

Integrated in the DSC AMB-300 is a dual-element PIR sensor that actively looks for changes in infrared energy. When movement from a person is detected, the sensor will send an alert to the security system to let it know of the situation. The device can actively distinguish between a human and other sources of motion that occur in the background.

The standard lens provides a coverage range of 30 feet, though it can be swapped out for a different lens if needed. Compatible lens types include the standard wall-to-wall lens, a corridor lens, a curtain lens and a pet alley lens. The device also uses temperature compensation to accurately detect humans at any temperature, even when the ambient is close to the human body. Also included is an LED light for providing visual indication of alarms.

An optional mounting bracket is available for the sensor to make installation easier. Please note that the AMB-300 is an addressable sensor that must be wired appropriately to achieve proper function. Also, for users who want a sensor with pet immunity, we recommend using the AMB-600 instead.