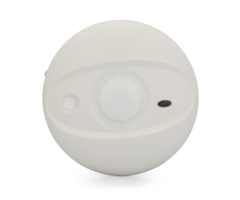 The DSC BV-500 Bravo 5 is a ceiling-mount PIR motion sensor that looks downward to detect motion. This version of the Bravo 5 sensor is Form A (normally closed wiring only), and it does not feature a tamper switch. Purchase the DSC BV-500 Bravo 5 Ceiling-Mount PIR Motion Detector here.

The DSC BV-500 Bravo 5 Ceiling-Mount PIR Motion Detector uses passive infrared (PIR) technology to detect any motion that occurs in an area. With its advanced lens and sensing capabilities, the sensor can actively distinguish between humans and other sources of motion that are present.

The BV-500 is mounted on the ceiling, and it looks down to detect motion. The device operates in the same manner as almost any PIR motion sensor. The sensor scans the area for the current levels of infrared energy. If motion is present, then a change in IR energy will occur. The BV-500 recognizes this change, and it alerts the system to let it know that motion is present. The system will then know to perform the programmed response for that zone.

Thanks to the sensor's multi-level signal processing (MLSP) technology, the BV-500 can actively distinguish between the IR energy signature of human and the IR signature of a different source. The BV-500 also utilizes temperature compensation to properly detect the movement of intruders when the ambient temperature is close to that of the human body. The device's digital signal analysis provides consistent detection across the entire coverage area.