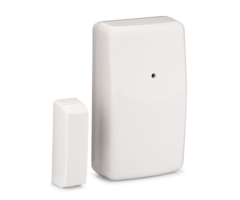 The sensor operates at a wireless frequency of 433 MHz. This makes it compatible with the DSC Impassa, as well as DSC PowerSeries Alarm Systems. There are three possible functions that will work with the device. The function that is performed will depend on its programming settings. These possible functions include operating as a standard door and window contact, as a tilt sensor for garage doors and as a wireless transmitter for hardwired devices.

Other features include a case tamper switch to let the system know if anyone tries to tamper with the device or disable it. An LED light on the front of the device will let the user know when the battery is low and in need of replacing. The device operates using a CR123A lithium battery that can easily be replaced by the end user. The device measures in at 2.9375"L X 1.6875"W X 1"H.

The DSC WS4965 is a wireless 433 MHz sensor that operates as a contact sensor with a reed switch, a tilt sensor, or a wireless transmitter. The sensor comes included with a magnet, and it has a built-in reed switch so that you can easily use it as a traditional door and window contact. The sensor can also respond based on tilting, which makes it ideal for monitoring a garage door that opens overhead. You can also connect up to two (2) NC wired contact sensors to the WS4965 so that it operates as a wireless transmitter. This is an incredibly versatile sensor with some great features, so we give it a 5-Star rating.

The biggest thing to like about the DSC WS4965 is its excellent versatility. You can use the sensor for three (3) different functions.These functions include monitoring a door or window as a contact sensor, monitoring a garage door as a tilt sensor, or helping a hardwired contact sensor communicate with a wireless 433 MHz system by serving as a wireless transmitter. The DSC WS4965 also supports some nice features, such as tamper detection, and it has an LED light to assist with troubleshooting when needed.

There are some minor downsides to consider with the DSC WS4965. First, it can only be used with 433 MHz systems. If your system does not support the 433 MHz frequency, then it will not support this sensor. Second, since the DSC WS4965 is a wireless sensor, it needs a battery to communicate. You will need to replace the lithium CR123A battery every few years as part of regular maintenance. Third the sensor is a bit on the bulky side, measuring in at 2.9375"L x 1.6875"W x 1'D. But these downsides are fairly minor, and they do not stop us from giving the DSC WS4965 a 5-Star score.