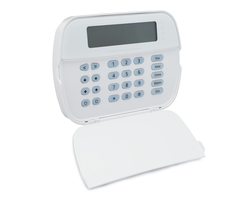 The DSC WS9LCDWF9 is a wireless push-button keypad for a Qolsys IQ Panel 2 Plus or a DSC Iotega Security System. It is commonly referred to as the DSC PowerG Wireless Arming Station. Alarm Grid often recommends this keypad for Qolsys IQ Panel 2 Plus users who need a secondary keypad, but they don't necessarily need something as powerful and robust as the Qolsys IQ Remote. For reference, the IQ Remote has a touchscreen that mimics the IQ Panel 2, as well as automation control and the ability to live-stream cameras. With the DSC WS9LCDWF9, you get something much more basic. But for some users, that's perfectly fine, and they prefer to save money with this standard wireless keypad. We give this product a 5-Star rating.

There are many things to like about the DSC WS9LCDWF9 Keypad. For one, it can be readily used with any wireless PowerG Alarm System. These include the Qolsys IQ Panel 2 Plus and the DSC Iotega. The keypad is great for arming, disarming, bypassing zones, and checking system status. It also offers Chime capabilities. We like the backlit keys on the numeric keypad, as they make it easier to control the system at night or in the dark. The keypad is small and compact, so it won't take up too much space. We also like the fact that the wireless keypad provides a good communication range, and it offers 128-bit AES encryption for enhanced wireless security. The fact that this keypad supports multiple languages (English, French, and Spanish) is also a plus. The keypad has multiple power options, as it can use a plug-in AC transformer (sold separately) or four (4) AA batteries. One other positive is that the keypad has a tamper switch to let the system know if someone opens it up.

There are some downsides for the DSC WS9LCDWF9 Keypad. The keypad cannot be used with the DSC PowerSeries NEO, even if a wireless transceiver has been added for PowerG support. The lack of a touchscreen is expected for a budget keypad, but many users won't mind spending more for a touchscreen keypad. The keypad lacks the ability to program a system, and it also cannot be used for automation control. It is also somewhat disappointing how the keypad cannot be used for programming the system. But these downsides are not very significant, and we are still able to give this product a 5-Star score.

Bad: Not for DSC PowerSeries NEO, No Touchscreen, No Automation Control, No Advanced Programming