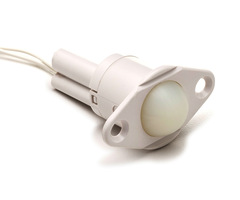 You can wire the Honeywell 956WH-B recessed rolling plunger switch to an open zone on any alarm control panel. If you are connecting your 956WH-B to a Honeywell alarm control panel, you should program the zone as either a perimeter zone type or an entry/exit delay zone type. The perimeter zone type will trigger an alarm anytime the system is armed and the door or window opens. With an entry/exit delay zone type, the 956WH-B will activate the programmed entry delay time as soon as the roller ball pops out of the plunger switch. If a valid user code is not entered before the entry delay times out, an alarm will be triggered.