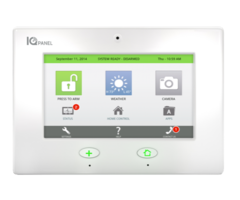 The original Qolsys IQ Panel AT&T is a discontinued security system. This system can no longer be purchased new, and since it has an integrated AT&T 3G Communicator that cannot be replaced, you also cannot activate this system for new alarm monitoring service. If you have an existing model of one of these systems, then you should understand that it will stop working for monitoring service once AT&T shuts down their 3G network. This is commonly referred to as the 3G sunset, and it is leaving many users in a scramble to upgrade to a system that supports LTE. For many systems, this is as simple as replacing the existing 3G communicator with an LTE model. But you can't do that with the original IQ Panel, leaving users with no choice but to replace the entire system. With that in mind, we only give the Qolsys IQ Panel AT&T a 3-Star rating.

There are some positive aspects associated with the Qolsys IQ Panel AT&T. It has touchscreen controls, which was fairly innovative when it was first released. The full-color menus are easy to navigate. And the system supported functionality with Alarm.com. And the system has an internal Z-Wave control for setting up automation. But the downsides are pretty crushing here. For one, the panel is quite bulky and fat by modern standards. The internal communicator can no longer be activated for monitoring service. Anyone with a system that is currently activated will need to replace it before AT&T shuts down their 3G network, or else they risk losing out on monitoring service. And the internal communicator not being replaceable is also a major downfall. Because of these downsides, we give the Qolsys IQ Panel AT&T a 3-Star rating, and even that might be generous.