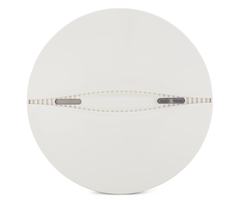 PG9926/PG8926/PG4926
Supervised Wireless PowerG
Smoke Detector Installation
Instructions
Features
PGx926 smoke detectors provide open area protection and
early warning of developing fires by:
• Activating a fire alarm upon a smoke condition.
• Sounding an alarm with its built-in alarm horn.
• Transmitting a coded alarm signal to a compatible wireless
alarm control panel.
Operation
The Test / Mute switch functions during normal operation as a
Test switch and during an alarm condition as a Mute switch.
Pressing the Test / Mute switch during an alarm condition stops
the buzzer sound for 8 minutes. If the condition is not restored
after 8 minutes, the buzzer will resound. Pressing the mute
switch will not restore the alarm condition.
The tamper switch actuator is depressed when the unit is
attached to the mounting bracket. Removal of the unit from the
mounting bracket causes the switch contacts to open,
transmitting a tamper event to the alarm system control panel.
The detector is disabled when
not attached to the mounting
bracket.
Device Setup
Attention:
The detector battery cover is fitted with a red button
that prevents the detector from locking onto the mounting
bracket if there is no battery inside. The smoke detector is
supplied with a 3V CR123A battery.
Caution!
To be installed by service persons in non-hazardous
locations only. Risk of explosi
on if battery is replaced by an
incorrect type. Dispose of us
ed batteries according to the
manufacturer's instructions a
nd according to local rules and
regulations. Batteries are to be replaced by service persons
only.
WA R N I N G :
Never remove batteries to stop a false alarm.
Open a window or fan the air around the detector to get rid of
the smoke. The alarm will turn itself off when the smoke is
gone. If false alarms persist, attempt to clean the detector as
described in this manual.
WA R N I N G :
Do not stand close to the detector when the alarm
is sounding. The alarm is loud in order to wake you in an
emergency. Too much exposure to the horn at close range may
be harmful to your hearing.
Note:
To keep the smoke detector in good working order, you
must test it weekly.
Note:
To ensure the continued operation of all wireless devices
after performing a system defa
ult, a global upload of all
wireless programming via DLS is recommended before
defaulting the system. After completing the system default,
download the wireless programming.
Legend
A. Buzzer Holes
B. Test button and LEDs
C. Bracket
D. Detector
E. 3 volt CR123A lithium
battery, consumer grade

• This End-User License Agreement (“EULA”) is a legal
agreement between You (the company, individual or entity who
acquired the Software and any related Hardware) and Digital
Security Controls, a division of Tyco Safety Products Canada
Ltd. (“DSC”), the manufacturer of
the integrated security sys-
tems and the developer of the software and any related products
or components (“HARDWARE”) which You acquired.
• If the DSC software product (“SOFTWARE PRODUCT” or
“SOFTWARE”) is intended to be accompanied by HARD-
WARE, and is NOT accompanied by new HARDWARE, You
may not use, copy or install the SOFTWARE PRODUCT. The
SOFTWARE PRODUCT includes computer software, and may
include associated media, prin
ted materials, and “online” or
electronic documentation.
• Any software provided along with the SOFTWARE PROD-
UCT that is associated with a
separate end-user license agree-
ment is licensed to You under the terms of that license
agreement.
• By installing, copying, downloading, storing, accessing or
otherwise using the SOFTWARE PRODUCT, You agree
unconditionally to be bound by the terms of this EULA, even if
this EULA is deemed to be a modification of any previous
arrangement or contract. If You do not agree to the terms of this
EULA, DSC is unwilling to license the SOFTWARE PROD-
UCT to You, and You have no right to use it.
LICENSE
The SOFTWARE PRODUCT is protected by copyright laws
and international copyright treaties,
as well as other intellectual
property laws and treaties. The SOFTWARE PRODUCT is
licensed, not sold.
1. GRANT OF LICENSE This
EULA grants You the
following rights:
(a) Software Installation and
Use - For each license You
acquire, You may have only one copy of the SOFTWARE
PRODUCT installed.