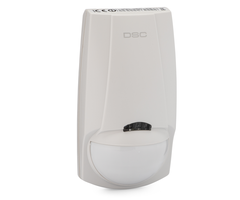 Less advanced motion sensor can potentially be "masked" so that they are not able to properly detect motion when an intruder is present. This is accomplished by tampering with the lens so that it is unable to function properly. However, the anti-masking feature of the DSC LC-103-PIMSK-W prevents this from happening. This makes it nearly impossible for an intruder to "beat" the sensor and make a clean escape.

With the sensor's digital signal analysis and Quad Linear Imaging Technology, the sensor can properly distinguish between human movement and any movement that occurs in the background or is caused by small animals. The device provides pet immunity for animals weighing up to 55 pounds, making it great for virtually any residential application.

The LC-103-PIMSK-W features both a passive infrared (PIR) sensor and a microwave sensor. The device will not activate unless both sensors are triggered. This is very useful for preventing false alarms that may occur on the system. The microwave sensor operates based on the Doppler effect, in which it will actively monitor for the way that outgoing signals bounce back and return to the sensor. The microwave sensor is somewhat unique, in that it features a micro-strip patch antenna to improve detection accuracy. The PIR sensor looks for changes in infrared energy that are caused by movement.

The sensor can be easily mounted by an end user, with or without an optional swivel-mount bracket. The DSC LC-103-PIMSK-W is wired with the alarm system as a Form A sensor (normally closed). The tamper switch on the device will alert the system if anyone tries to open it up or disable it while the system is armed.