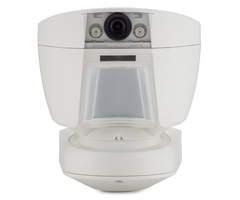 The DSC PG9944 is an outdoor image sensor. It can be used with any system that supports PowerG devices, including the Qolsys IQ Panel 2 Plus and a DSC PowerSeries NEO with an added wireless receiver. The sensor combines a motion sensor and a still-motion camera into one device. The sensor will begin capturing images when it triggers an alarm on the system. Ten (10) images are taken in total and sent to the panel. However, only the first of these images is sent to Alarm.com for remote viewing. Overall, we like the DSC PG9944, and we give it a 5-Star rating.

There are many positive aspects regarding the DSC PG9944. For one, it produces high-quality images, making it easy for the user to determine what is going on when an alarm is triggered. The sensor is weather-resistant, and it can be used nicely in an outdoor setting. It is also great for use in barns and garages. It offers pet immunity for small animals weighing up to 40 lbs, which is great if you have a small dog or cat in your home, or critters that run around outside. We have found that this sensor is particularly useful for preventing false alarms, thanks to its Octa-Quad PIR Sensor and its True Motion Recognition (TMR) technology. And like any PowerG Sensor, the DSC PG9944 has a great wireless range, and it uses 128-bit AES encryption for enhanced security.

There are only a few downsides for the DSC PG9944. One issue is that the device will only capture images when it is the sensor that triggered an alarm on the system. If an alarm is caused by a different sensor, then no images will be produced. The fact that only the first of ten (10) captured images will appear on Alarm.com is also somewhat of a let-down. The sensor is rather bulky, and many users are turned-off by the fact that its design literally resembles a toilet. But these downsides aside, we can still give the DSC PG9944 a 5-Star rating.

Bad: Only Captures Images if Sensor Triggers alarm, Only First Image Sent to ADC, Bulky, Looks Like a Toilet