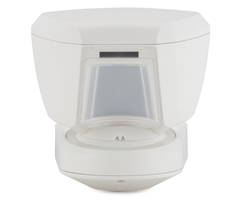 The PG9994 is an outdoor motion detector that is used with PowerG-compatible alarm systems. It uses eight individual PIR motion sensors to optimally detect motion even in extreme weather conditions and environments. Purchase the DSC PG9994 Wireless Outdoor Motion Detector from Alarm grid.

The DSC PG9994 Outdoor Motion Detector is an advanced sensor that uses eight individual PIR sensors to accurately pick up motion. This advanced technology allows the sensor to distinguish between a person and any false sources of motion, such as a swaying tree or a passing animal.

Inside the PG9994 there are eight PIR sensors, with each acting as a quad detector. This allows the device to accurately determine when an alarm should be produced. The sensor performs exceptionally well in outdoor settings, including in harsh conditions. This includes environments with rain, snow, dust, heavy wind and intense sunlight. The device also offers advanced motion analysis. Using this technology, the device takes into account the time, amplitude, background temperature and speed of any person or object that is detected. By comparing this information across multiple sensors, the device can more accurately predict what caused a change in infrared energy. This can help it determine whether or not a true alarm is needed.

Other features of the PG9994 include mirror optic capabilities that deliver an extended range and increased detection sensitivity. The reflective, nickel-based surface of the sensor serves as a selective optical filter against infrared energy. This eliminates interference from white light, and it improves overall functionality. The device's unique V-Slot technology makes it more difficult for intruders to disable the device when it is in use. A tamper switch will also alert the system if the device is opened up while the system is armed. Finally, the device offers pet-immunity for pets weighing up to 40 pounds.

The PG9994 is part of the DSC PowerG Series, and it offers the full capabilities of a PowerG Sensor. It operates at a wireless frequency of 915 MHz. This allows it to work with any DSC PowerSeries Neo Panel and any Qolsys IQ Panel 2 that has a PowerG daughtercard installed. The device can send signals to a panel from up to 2 kilometers away with a clear line of sight. It also utilizes 128-bit AES encryption to prevent any hacking or takeover attempts from going through successfully.

NOTE: The maximum range for a PowerG Sensor when used with an IQ Panel 2 Plus System is only 2,000 feet in open air. This is considerably less than the advertised 2km range. The 2km range refers to when a PowerG Sensor is used with a DSC PowerSeries NEO System.

The DSC PG9994 is an outdoor PowerG Motion Sensor. It can be used with any system that supports PowerG Sensors, including the Qolsys IQ Panel 2 Plus, the DSC Iotega, and any DSC PowerSeries NEO Panel with an added wireless receiver. As a PowerG Sensor, the DSC PG9994 offers an impressive wireless range of up to 2km in open air, depending on the panel it is being used with. It also uses military grade 128-bit AES encryption in all of its communications for added security. We think this is an outstanding sensor, and we give it a 5 Star rating.

There are many things to like about the DSC PG9994. One aspect we like is the fact that the sensor uses eight (8) smaller individual PIR sensors in conjunction to accurately detect motion. And with the device's protective and water-resistant exterior, the PG9994 still works great in less-than-ideal weather conditions, such as heavy rain and snow. Meanwhile, the mirror-optic capabilities of the sensor further improve upon its already great coverage range and detection accuracy. As we mentioned earlier, the sensor has an excellent wireless communication range as well. And the fact that the sensor uses military grade 128-bit AES encryption is also appreciated, as it makes the sensor virtually impossible to hack. We also like the fact that the sensor has a tamper cover switch, and the system will be alerted if anyone tries to open up the sensor.

There are not many downsides to the DSC PG9994. One issue that we find is with the design of the DSC PG9994. It literally looks like a small toilet. This has led to many jokes around the office, and it usually results in a few chuckles when recommending it to customers. We're not sure why DSC chose this design, but whatever. We must also admit that the sensor is quite pricey. As of June 2020, we have it listed for $193.99. That is, without a doubt, one of the most expensive single sensors we have ever encountered. But if you can stomach the steep pricetag and the potty design, then the DSC PG9994 is a fantastic product. We give it 5 Stars for its great performance.