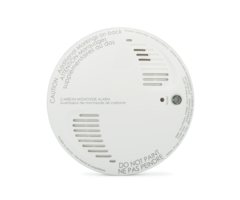 The DSC WS4913 is a wireless carbon monoxide detector. The device will monitor a home or business for the presence of lethal carbon monoxide gas. The sensor will function with any DSC Impassa or DSC PowerSeries Alarm System. Purchase the DSC WS4913 Carbon Monoxide Detector from us.

The DSC WS4913 Wireless Carbon Monoxide Detector is designed to monitor a building for the presence of potentially lethal carbon monoxide gas. Upon sensing a CO outbreak, the device will alert the system and trigger an alarm. The device operates at 433 MHz, and it includes an 85 dB sounder.

Carbon monoxide is an odorless and tasteless gas that is lethal to humans when breathed in. An outbreak of CO gas can occur due to faulty appliances and environmental factors. The idea behind a CO sensor like the WS4913 is that it will alert the user before the presence of CO gas reaches life-threatening levels. With an appropriate alarm monitoring plan, an off-site user can receive an alert about the presence of the carbon monoxide gas.

We generally recommend placing any CO sensors outside of sleeping areas, near attached garages and close to any fuel-burning appliances. With its 85 dB sounder, which is about as loud as a passing diesel truck, the WS4913 can work as a standalone sensor. However, we recommend programming it to an alarm system. This is the only way to receive automatic emergency dispatch and to receive remote alerts in the event of a CO outbreak.

The WS4913 features a slimline design, allowing it to fit in with the decor quite seamlessly. The device will alert the system if it is experiencing a low battery or if anyone tries to tamper with the device. An LED light on the device indicates the sensor's current status. The device operates using a CR123A battery, and it has an average battery life of 4 to 5 years.