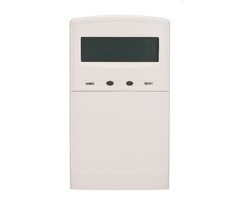 There are some good aspects about the Honeywell 6165EX. Many users appreciate its slim profile, and its compact design is often preferred over the 6160. Since it is an Alphanumeric Keypad, you can use it for deep-level programming, which is quite nice. In fact, this keypad is the equivalent of a Honeywell 6160, so you are getting all the features. The keypad also features four (4) programmable function keys, which is nice if you ever quickly need to perform a system action. We also like the relatively low power draw of the 6165EX, as it uses just 150 mA of power when the system is in alarm mode.

But the downsides of the Honeywell 6165EX should not be ignored. This keypad costs more than a Honeywell 6160, and there's not much reason to spend the extra money. While the keypad might have a slim and compact design that is appreciated by many, it isn't exactly an "aesthetically pleasing" keypad. Most of our technicians agreed as a matter of personal opinion that the keypad is quite ugly. It's not exactly a keypad that looks great on the wall. But the biggest downfall of the Honeywell 6165EX is its terrible backlight. We have had customers report that it is difficult to use this keypad in the dark. Once they switched to a 6160 Keypad, these issues were fixed.