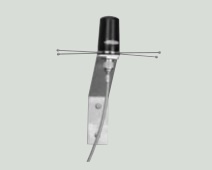 There are many positive aspects regarding the Honeywell CELL-ANT3DB. For one, it provides a strong, 3dB gain, which should provide a major boost in cell signals, even for those in rural areas. The device is waterproof, which gives the user some good options in choosing a mounting location. You want to have the antenna high up and facing the nearest cell tower. Mounting hardware comes included, so that you can get started installing the antenna.