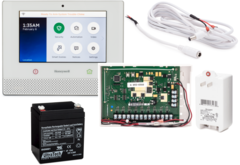 The Honeywell LyricC2WPK is a wireless system kit that includes a Honeywell Lyric Alarm System and a Honeywell 5800C2W Wired to Wireless Converter. This kit was built for existing wired system users who are looking to upgrade to a newer and more advanced Honeywell Lyric Alarm System. The Honeywell 5800C2W should be installed in-place of the old wired panel. All of the existing sensors will connect with one or more 5800C2W units. The 5800C2W will then allow these hardwired sensors to communicate wirelessly with the Lyric System. This is a very convenient kit that can make it easy to upgrade to a new wireless alarm system. That is why we give the Honeywell LyricC2WPK a 5 Star rating.

There are many things we like about the Honeywell LyricC2WPK. For one, the Lyric is a great system. It is extremely easy to use and set up, and it offers awesome features like built-in Z-Wave, integrated WIFI, and HomeKit functionality. The Honeywell 5800C2W can then support up to nine (9) hardwired sensors so that they can be used with the Lyric. Each sensor will require its own wireless zone on the Lyric System. If you need additional sensors, you can get another 5800C2W to support additional wired sensors. Or you can just add Honeywell 5800 Sensors or Honeywell SiX Sensors for use with the Lyric System. Another thing we like about the LyricC2WPK is that it includes a backup battery for use with the Honeywell 5800C2W.

Bad: Only Needed If You Have wired Sensors, Limited Number of Zones on 5800C2W