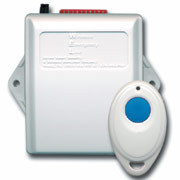 The Honeywell WEL-Y is an add-on kit that includes a wireless receiver module and a panic switch. The receiver is not a traditional RF wireless receiver for security system sensors. Instead, it is a receiver module designed for use exclusively with the included panic switch. You can pair up to 7 of these panic switches on a single receiver, so that is a nice addition. But on the other hand, the Honeywell WEL-Y is quite old, and it was really only intended for older hardwired systems that would mostly be considered archaic today. These systems are seldom used so it is doubtful that you have a panel compatible with one. But if you happen to be using one of these older panels, then the Honeywell WEL-Y might be useful in your situation. This a very old device, but it still works well. That being said, it is somewhat difficult to set up, so it only gets a 4 Star rating.

There are many things to like about the Honeywell WEL-Y. It allows you to add panic switches to your compatible hardwired system. It offers functionality with a wide selection of older wired panels, including those from ADEMCO, DSC, First Alert, Caddx, and Moose. This can be very useful if you want to use panic switches, but don't need a full wireless receiver for adding wireless sensors. The panic button can be triggered for police, fire, or medical and can also be used to trigger a relay device. There is even the ability to program it for instant activation or a three (3) second delay for preventing false alarms. It uses more than 4 billion encrypted codes through the Honeywell Street Smart wireless protocol. This makes the panic switches extremely secure.

However, there are some downsides regarding the Honeywell WEL-Y. For one, it is discontinued, and you will be unlikely to find it new. A used model should still work well though. Second, the device is really only meant for use with a selection of older hardwired panels, which can be seen in the description. The panic button has a 6V coin battery, and it will need to be replaced periodically. Although a receiver module is used, it cannot be used with traditional RF sensors, only compatible panic switches. Also, the unit has been known to be difficult to set up. For that reason, we only give it a 4-Star rating.