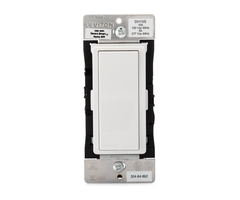 The Leviton DH15S-1BZ is an in-wall smart light switch designed for use with the Apple HomeKit platform. The switch connects with a local WIFI network to integrate with HomeKit. This allows iOS users to control the device remotely using their iPhones. The smart switch can also be operated using voice commands that are sent through the Apple Siri voice assistant. Overall, the Leviton DH15S-1BZ is a great light switch option for HomeKit users. However, non-HomeKit users won't really be able to get much out of it. But Alarm Grid gives the Leviton DH15S-1BZ a 5-Star score due to its HomeKit capabilities.

The main thing to like about the Leviton DH15S-1BZ is its ability to interface with HomeKit. As we mentioned before, the HomeKit integration allows the user to control the switch remotely through an iPhone and by making voice commands through Siri. We also appreciate the fact that the Leviton DH15S-1BZ can be set up and controlled through the Leviton Decora Smart Home App. This provides greater control over the accessory so that you can configure it exactly how you like. One other major positive is how the Leviton DH15S-1BZ works with most types of lights and ceiling fans. It can even be used with many other switch-operated devices.