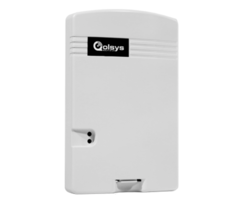 The Qolsys IQ Wireless Translator translates up to 63 Wireless Honeywell devices on frequencies so that they can be learned into the IQ panel and IQ Panel 2. A great money-saver for those who are replacing a Honeywell system and its sensors with a Qolsys.

With the Qolsys IQ Wireless Translator, you can pair your Honeywell and 2GIG devices to your Qolsys panel for seamless connection and security.

This translator is designed to listen to Honeywell and 2GIG installations, and then send that information to any Qolsys-compatible device. This system gives the user a consistent connection to the main panel. The transmitter can send all alarm, supervisory, and trouble signals to your central hub.

Instead of replacing each unit, which could be quite costly, you can only install and program this wireless translator to make all your units perform in sync. It’s dual-antennas ensure a reliable connection for up to 100 feet both while listening and transmitting.

This translator is relatively easy to install and use. You can enroll or un-enroll units effortlessly. It works with many, but not all 2GIG and Honeywell sensors. Be sure to read the information below to ensure that this wireless translator is right for you and your home.

What the Qolsys IQ Wireless Translator 345 is For

Your home security system should be tailored to fit your needs and keep your home secure. Sometimes, that may mean buying pieces from different alarm companies. To actually protect your home, you need your security sensors to communicate with the control panel seamlessly.

Unfortunately, sometimes your control panel is not compatible with the security sensor you need. That’s where this wireless translator comes in. The Qolsys IQ Wireless Translator 345 is designed to take input from up to 63 devices, translate the information, and then send it to your Qolsys-compatible panel.

This device is designed to translate 2GIG and Honeywell devices into a language that your Qolsys system can understand. Place it between your sensors and your control panel for optimal performance.

If you have a large property that you want to divide into several sections, this may be the translator you need. You can create a unique wireless identification for individual zones and one zone for the central unit. This unit is also perfect for the skeptical consumer since it comes with a two-year warranty.

The main power terminal needs to be 12V DC with at least 50 mA. When installing this translator, remember that the power terminal cannot tell which wire is negative and which is positive. If the unit loses 12V DC, the battery backup will be triggered.

If your home loses power, you shouldn’t lose protection. The Qolsys IQ Wireless Translator 345 takes three AAA batteries for backup power. This alternate power will last up to 72 hours and will begin to warn you of a low battery when it only has 48 hours left.

Dual antennas allow this translator to receive and transmit information without interruption. The antennas are mounted on the outer terminals and have a range of 100 feet to the main panel.

Installation and Use Instructions

Before purchasing this product, it is important to check that it is compatible with your devices. The Qolsys IQ Wireless Translator is never to be used with carbon monoxide or smoke sensors. Check the important notes section to see a small list of other incompatible units.

Prepare the external power supply for connection before you insert three AAA batteries for the backup supply. Then, follow installation instructions included in the package.

When you have installed the unit, it’s time to enroll each of your sensors. First, select “Add Sensors” mode to begin the process. Then, choose the behaviors you want the sensors to report. Press the “Translator Enroll” button as many times as needed to find the device.

Then follow steps listed in the instructions for each device. Different types of Honeywell and 2GIG devices require individual enrollment instructions, so be sure to pay close attention.

When you want to check the health of the translator, choose “Translator Group 13.” Then, wait for the panel to say, “Trip Sensor.” At that time, trip the tamper on the translator.

If you revamp your entire security system, you can do so relatively simply. To delete the all currently enrolled sensors, press “Enroll” several times, until all Device Type LEDs have turned off. Then, press and hold “Enroll” for five seconds or until it beeps.

If you’re not doing a total overhaul, you may just want to delete one device type. If so, press “Enroll” until the Device Type LED for the type you want to remove is lit. Then again, hold the “Enroll” key for five seconds or until you hear a beep.

The LED operation is straightforward and instinctive. The green LED lights when 12V DC power is available. It will blink when the unit receives packets from compatible units.

The red LED turns on when the device is low on battery. However, this will not occur if the unit has lost 12V DC power and is running on backup battery power. The red LED blinks when the unit transmits.

The following Honeywell devices will not work properly with this translator: 5800 Micra, 5811 Micro, 5814 Micro, 5816 Temp, 5818 Recessed, and 5820L Slim. These units run on zone Loop 1. While they will enroll with the translator, they will not perform well.

Furthermore, 5817 Commercial, 5819 Shock, and 5870 Asset will not function well with this wireless translator. These units run on multiple Loops.

As with all complex wireless systems, this translator may cause questions. If you have difficulties with your translator, try rebooting the entire system. This simple step can solve many malfunctions. If this does not work, be sure to call customer service for professional assistance.