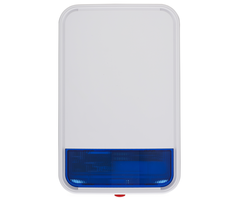 Document ID: 29008699R001
PG9911/PG8911/PG4911
Supervised Wireless PowerG Outdoor
Siren Installation Instructions
The PGx911 is a fully supervised, 2-way wireless outdoor siren,
designed for installation in areas in which wiring action is difficult or
impossible.
Features
• Built-in link quality indicators reduce installation time by
eliminating the need for the installer to physically approach the
alarm controller.
• Power supply is a single non-rechargeable battery, with an option
for a second non-rechargeable battery.
• Multiple sound types: Burglar (between 1400Hz - 3200Hz), fire,
CO and flood.
• Entry/Exit beep can be enabled via the control panel to sound
once the user has armed the system and once the user has entered
the protected area.
• Squawk (beep) sounds can be configured via the control panel to
indicate alarm system arming (1 squawk) and disarming (2
squawks) by a wireless key.
• Double Tamper protection sends a tamper alarm to the system if
the siren front panel is removed or if the siren is removed from
the wall.
• Pressing the self-test button momentarily activates the LEDs and
sounder indicating the siren is operating correctly.
Note:
Sounder is activated for a predefined duration according to
local requirements, or until the system is disarmed. The strobe light
operates as described in the HSM2HOST installation manual.
Operation
• Siren and strobe light activates when an event message is
received from the system.
• If the siren is tampered with while armed, the siren transmits a
tamper message to the control panel. The control panel
determines whether to activate the siren. If the siren does not
receive an acknowledge message from the alarm system, the siren
functions independently.
• When the battery voltage is low, a low battery message is sent to
the alarm system. After message delivery, at least 2 siren alarms
are possible before the siren battery is totally depleted.
Device Setup
Caution!