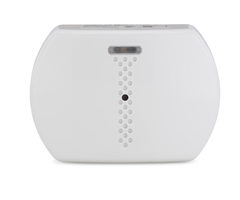 PG9922/PG8922/PG4922
Wireless PowerG 2-way Glass-break
Detector
Operation
The PGx922 is a supervised, wireless 2-way glass-break detec-
tor that detects the breaking of fr
amed glass mounted in an out-
side wall. The PGx922 is protected by a front and back tamper
switch that transmits a tamper message when the cover is
removed or when the base is forcibly detached from the wall.
This detector is wall/ceiling mountable and suitable for most
types of window/door glass: pl
ated tempered, laminated, wired,
coated and sealed insulating glas
s. No adjustment is necessary
during installation - the det
ector is fully pre-calibrated.
Figure 1. General View
A. Microphone
B. LED
Caution!
To be installed by service persons in non-hazardous
locations only. Risk of explosi
on if battery is replaced by an
incorrect type. Dispose of used
batteries according to the manu-
facturer's instructions and according to local rules and regula-
tions. Batteries are to be replaced by service persons only.
Observe polarity when replacing batteries.
Caution!
The back tamper switch will not protect the unit
unless the break-away base segment is secured to the wall with
at least one screw.
Note:
To ensure the continued operation of all wireless devices
after performing a system default, a global upload of all wire-
less programming via DLS is recommended before defaulting
the system. After completing the system default, download the
wireless programming.
Acoustic Sensor
The acoustic sensor module of the PGx922 is omni-directional,
providing full coverage. Coverage is measured from the sensor
to the point on the glass farthest from the sensor. The sensor can
be mounted as close as 1.5m (5 ft) from the glass.
Figure 2. Typical Range Measurement
When mounted on opposite wall, on adjoining walls or on the
ceiling, the range is 7.6 m (25 ft) for plate, tempered, laminated,
wired, coated, and sealed insulating glass.The coverage range
also depends on the angle between the detector and the glass -
for a higher angle, maximum range is reduced. See the follow-
ing table for details:
Figure 3. Angle between detector and window
Installation
Optimizing Detection and Avoiding False Alarms
For best detection,
avoid installing in:
• Rooms with lined, insulating, or sound deadening
drapes.
• Rooms with closed wooden window shutters inside.
For best false alarm immunity:
• Avoid 24-hour loop applications (perimeter loop OK).
• Do not use where white noise, such as air compressor
noise, is present.
• Avoid rooms smaller than 3 x 3 m (10 x 10 ft) and rooms
with multiple noise sources such as small kitchens, noisy
areas, garages, small bathrooms, etc.
Areas to avoid:
• Glass airlocks and glass vestibule areas
• Noisy kitchens
• Residential car garages
• Small utility rooms
• Stairwells
• Small bathrooms
Note:
For glass break protection in such applications, use shock
sensors on the windows or window frames.
Do not install in humid rooms