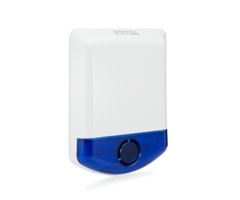 English, Français, Español
Português, Italiano, Nederlands
Svenska, Norsk, Dansk,
Č
esky
Polski, Suomi,
₼㠖
,
Deutsch
WT4911 / WT8911 v1.1
Installation Instructions, Instructions d’installation, Instrucciones de instalación, Instruções de Instalação, Istruzioni di
installazione, Installatiehandleiding, Installationsguide, Installasjonsinstruksjoner, Installationsvejledning,
Pokyny k instalaci, Instrukcja instalacji, Asennusohjeet,
⸘孔㖖◦
,
Installationsanleitung
DG009211
NOTE: The siren is listed for UL/ULC Residential Burglary applications and it is intended to annunciate only burglary alarm ton
es. The
siren will sound a dual frequency sweeping tone for burglary alarms. Carbon Monoxide and Fire signal annunciation use have not
been
evaluated by UL/ULC. The LED strobe light is not intended for Hearing Impaired signaling. Use this installation sheet along with the associated alarm system installation manual for
installation instructions and programming details. All instructions specified within that
manual must be observed. The WT4911/8911 is a two-way wireless outdoor siren. Siren
sounds and the strobe light are activated when an alarm condition is received via DSC wire-
less protocol from a compatible, two-way enabled security panel (e.g., PC9155). The
WT4911/8911 must be enrolled on the security panel before it can receive commands
from the panel for sounding alarms, strobe activation and communicating a required
response, such as the WT4911/8911 status or the local outdoor temperature. The outdoor
siren is capable of sounding different alarm cadences (e.g., carbon monoxide, continuous
burglary, pulsating fire, or temporal three fire), and bell squawks to suit the type of com-
mand it receives. Up to four WT4911/8911 can be enrolled on the same security panel and
supervised as separate units. To ensure two-way contact between the siren and the security
panel, the WT4911/8911 regularly sends supervisory signals to the security panel. With
each supervisory signal sent to the panel, the siren provides the outdoor temperature. In
addition, the WT4911/8911 monitors for the case and wall tamper switch states, and the
battery state. In the event of a low battery or a tamper activation, the WT4911/8911 will
transmit the appropriate signal to the security panel, and (if configured) provide an audible
and visual indication that a local event has occurred.
NOTE: For UL/ULC listed applica-
tions the siren sounds a continuous tone.
Specifications
NOTE: Battery life has not been evaluated by UL and ULC.
Powering up the WT4911
The WT4911 contains a battery that includes a feature called ‘passivation’. This feature
preserves the shelf life of the battery when it is not being used. Every WT4911 will need to
be ‘depassivated’ before using the outdoor siren for the first time.
NOTE: Make sure to follow the steps below for a brand new battery on the unit or
if a battery is being replaced. The WT4911 could lose power prematurely if a
brand new battery is not used.
1. Hold the tamper switch closed before plugging the battery in.
2. Plug in the battery AND continue to hold the tamper for 10 seconds before releasing it.
3. Once the tamper is released, after the initial 10 seconds, the siren flashes the strobe in
several different patterns to indicate it is in depassivation mode.
NOTE: It can take a unit up to 30 minutes to fully depassivate.
4. When depassivation is complete, the strobe lights shut off completely and the siren
starts to beep 3 times every 5 seconds.
5. Create a tamper. The WT4911 will go into a normal power up sequence with 6 short
beeps and flashes of the strobe lights.
6. The WT4911 is ready to be enrolled on the system.
NOTE: If the battery is unplugged during depassivation and plugged back in
within 1 minute, the depassivation sequence will continue.
Restart Depassivation Sequence
When depassivation reaches 30 minutes the siren stops trying to depassivate the battery
and beeps once every 5 seconds. To end this siren condition and begin the depassivation
sequence again, hold the tamper and/or replace the battery. If batteries are extremely pas-
sivated (i.e., battery could be defective or dead) they should be replaced.
Two-Way Wireless Outdoor Siren Enrollment
Setting up the WT4911/8911 consists of enrolling and powering up the device. Enrolling
the WT4911/8911 permits the siren to communicate with the security panel. The installer
can activate the outdoor siren by Quick Enrollment or Serial Number Programming.
Quick Enrollment
1. Enter the enrollment mode through installer programming, see section [898].
2. Power up the outdoor siren by activating the pre-installed battery (plug the battery
cable into the battery connector located inside the backplate to activate the battery.) If
it is already powered up, press and release the tamper switch.
3. The outdoor siren sends a request to the security panel to enroll on the system.
4. The keypad displays the electronic serial number which must be confirmed by keying in
[*]. If the electronic serial number is incorrect, Press [#] and repeat this step.
NOTE: The electronic serial number is a 8-digit alphanumeric number located on
a sticker on the wireless device.
5. Select the module number that the device should be enrolled as.
NOTE: To enroll an existing siren onto a new panel, that siren must first be pow-
ered down then powered back up again.
6. To enroll each additional outdoor siren, repeat starting from Step 2.
Serial Number Programming
1. Enter the enrollment mode through installer programming, see section [804].
2. Select the module number the device will be enrolled as. Sections [301]-[304] for sirens.
3. Enter the serial number using the keypad. To delete a previously enrolled siren, enter all
zeros (0’s).
Placement Test
Perform a placement test to ensure there is sufficient signal strength at the desired
mounting location for proper communication between the security panel and the siren.
1. Place the security panel into placement test, see section [906].
2. Start the placement test by tampering the outdoor siren being tested.
3. The siren will respond with 1 strobe flash and 1 beep if the location is “Good”. If the
siren is at a “Bad” location then it will respond with 3 strobe flashes and 3 beeps.
WARNING: Wear hearing protection when installing the outdoor siren.
Physical Installation
The outdoor siren is mounted onto a flat surface, such as the outside of a building. A wide
variety of mounting surfaces are acceptable but the mounting material must be able to
support the weight of the siren.

(b) Storage/Network Use - The SOFTWARE PRODUCT may not be
installed, accessed, displayed, run, shared or used concurrently on or from
different computers, including a workstation, terminal or other digital elec-
tronic device (“Device”). In other words, if You have several workstations,
You will have to acquire a license for each workstation where the SOFT-
WARE will be used.
(c) Backup Copy
-
You may make back-up copies of the SOFTWARE
PRODUCT, but You may only have one copy per license installed at any
given time. You may use the back-up copy solely for archival purposes.
Except as expressly provided in this EULA, You may not otherwise make
copies of the SOFTWARE PRODUCT, including the printed materials
accompanying the SOFTWARE.
2. DESCRIPTION OF OTHER RIGHTS AND LIMITATIONS