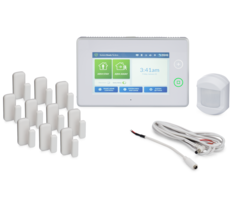 No Communicator, No Encryption, Discontinued
Submitted on 09/23/2020 Alarm Grid

The 2GIG GC3PK10 is a discontinued security system kit from Alarm Grid. The kit included a 2GIG GC3 Security System, ten (10) door and window contact sensors, a motion detection sensor, and a Honeywell LT-Cable for providing power. Although this kit has been discontinued, there really isn't anything wrong with it. The 2GIG GC3 can still be used for alarm monitoring service, provided that you obtain a compatible cellular communicator upgrade. The major downfalls for this kit are that no communicator is included and that no encrypted sensors are supported by the 2GIG GC3. Because of these downsides, we give the 2GIG GC3PK10 a 4-Star rating.

There are positive aspects about the 2GIG GC3PK10. The panel and the included sensors all have a great build quality, and you should be able to rely on them for many years. By adding a compatible LTE cellular communicator, you can use this system for alarm monitoring service and connect it with the Alarm.com servers. This will allow you to control your system remotely and check its status from pretty much anywhere. We also like the fact that the GC3 has a built-in Z-Wave Plus controller. This is ideal for establishing a smart home automation network for use with the system.

But the downsides for the 2GIG GC3PK10 should not be ignored. No communicator is included with this kit, so you will need to buy one separately. Really, it makes more sense to just buy a kit with a bundled communicator. Alarm Grid offered various GC3 Kits with included communicators, so buying one without a communicator is a bit silly, unless you were planning to use the GC3 as a non-monitored system. There are no encrypted sensors supported by the 2GIG GC3, so that's a letdown if you were hoping to set up an encrypted system. There is also the fact that this system kit is discontinued, and you are unlikely to find it new. All things considered, the 2GIG GC3PK10 gets a 4-Star score from Alarm Grid.