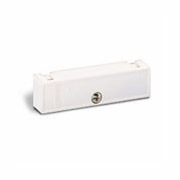 There are many things we like about the Honeywell 11 Wired Shock Sensor. For one, the device has a great build quality, and it provides long-lasting use and performance. The sensor is available in both white and brown colors, so you can choose the color that matches your decor the best. One potential use for the sensor is to use it to detect earthquakes. This is typically done by users who live in areas where earthquakes are relatively common. The device is small and compact, allowing you to fit it into tight spaces if needed. The Honeywell 11 does not draw much power from the panel, and it only plays a minor role in the load calculation for the system. And we like the fact that the sensor can have its sensitivity adjusted.

But there are some downsides to the Honeywell 11 Shock Sensor that should be kept in mind as well. The device has a somewhat dated design, and there are certainly more attractive sensors available. But given that the sensor is rather small and inconspicuous, this really isn't a big deal. Shock sensors like the Honeywell 11 are known to be somewhat prone to false alarms. Using a motion sensor in conjunction with door and window contacts will make a false alarm less likely to occur. Like any wired sensor, you will need to run a wire from the panel to the sensor. But these downsides are relatively minor, and they do not stop us from giving the Honeywell 11 a 5 Star rating.