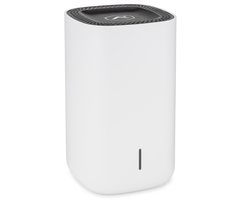 When the internet is restored, the ADC-SVR122 will then send any of the captured footage to the Alarm.com Servers for remote viewing. This will be the case as long as the Alarm.com Cameras are actively connected with the ADC-SVR122 module. After the video footage has been sent to Alarm.com, the user can view it from both the Alarm.com website and the Alarm.com Mobile App on Android and iOS devices.

If the internet has not yet been restored, then there is still a way to view the footage for the Alarm.com Cameras. You can use an HDMI cable to connect the ADC-SVR122 module to an external monitor. This will allow you to view any recorded clips, even if the network is still offline. You can connect a USB mouse to the ADC-SVR122 to serve as a controller. End users can view both recorded clips, as well as the current live streams. This is perfect for reviewing footage while the internet remains down.

[DIGITAL EFFECT] Hi, DIYers, Joe from Alarm Grid. And today we're going to talk about how the ADC-SVR122 behaves in the event of an internet outage. I have one of these right here. This is the new 24-hour recording solution from alarm.com. Installing one of these in your home with alarm.com cameras will allow it to save, record a video from those cameras.

Now you may be interested in how this works when the internet goes down, because as you may know, alarm.com cameras, when they're just set up by themselves, they're going to capture motion recording, and they're going to send it up to alarm.com. So if you have these cameras installed and you don't have any internet service up, they won't have a pathway to send that video and you could miss events that occur in the home.

This is going to help prevent that from happening, as this will allow the cameras to record directly to the SVR122, and then this is going to send it up to alarm.com right from itself. The benefit to having one of these installed in the home, is that if the internet goes down, as long as your router and switches and local network stuff is up and working, and the cameras have a Wi-Fi or internet or ethernet pathway back to the SVR-122, they're going to be able to record video and save it right on this.

When the internet comes back up, this will be able to send all that video up to alarm.com and you'll be able to see it on a device. The cool thing about the SVR122 though, is that on the back of it, you have an HDMI out, and you'll also have a USB port where you can install a mouse. This allows you to look at local video or look at video that's on the SVR122 on a screen.

So even if the internet has gone down and you want to see what's going on certain cameras, all you'll have to do is head over to the unit or wherever you have the monitor installed, click and check out what's going on, and you'll be able to continue to see what's up with cameras that are still communicating over your local Wi-Fi or network back to the SVR-122.

This is a huge benefit, and this really makes it a great device to install if you want more of a comprehensive camera system. Because with a lot of these camera systems that are out there that integrate with alarms, they don't have a local recording solution, which is troubling or problematic if your internet goes down and you want to see what's going on with your cameras.

Again, this allows you to remedy that issue. And if you are at home with the internet down, you will be able to head over to the monitor that you connect to this to see what's going on with the unit. And again, when the internet goes back up, this is going to have all that video saved from cameras that are still communicating with it, and you'll be able to access all that from your alarm.com app.

As one last final point, one of the biggest differences between the older version of this particular device, which is the SVR100, and this new one, the SVR-122, is the fact of how you can attach a screen to the new one and a mouse to see what's recorded and saved on the device. The older version, the SVR100, that's still going to record and give you that 24-hour recording option. It'll still continue to record if the internet drops in the home. And it will still upload everything that it has recorded to connected cameras when the internet comes back up.

But you're not going to be able to go to the device and see what's recorded on it, as it has no video out. And it doesn't have a place you can plug a mouse in. So for that reason, if this feature is critical to your installation or if you just want to be able to have a monitor connected to your video recording device that isn't communicating through the internet and can just work locally, then the SVR-122 is going to be what you want to go with.

If you do have any questions all about setting up the SVR-122, alarm.com or cameras in general, feel free to give us call at 888-818-7728. Send us an email to support @alarmgrid.com. Or head over to our website, www.alarmgrid.com. If you did enjoy the video, feel free to subscribe. And if you want to be notified when we post future videos, hit the notification button below and we'll send you an update when we do so. Thanks for watching and have a great day.