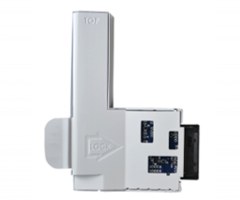 In this video, Jorge upgrades the cellular communicator inside the 2GIG GC3 Security System. This is done by powering the panel down, opening up the panel, taking out the old communicator, inserting the new one. Adding a new communicator will improve communication speeds and extend the panel's life.

In addition to extending the life of your security system, a new communicator will also increase its communication speeds. This can come in handy whenever you send commands through Alarm.com. This includes and system commands like arming and disarming, as well as automation commands like turning off the lights or adjusting the thermostat. Users may notice that commands go through faster and that overall performance is improved.

If you plan on upgrading your system's communicator, make sure you arrange the swap with your alarm monitoring provider before you do so. They will need to update the information with Alarm.com so that your communicator works properly. Only complete the swap once you have received permission from your monitoring company. Remember, you should power down your system before completing the swap. Failing to power down the system could result in damage.

Please Note: When swapping the cell module in the 2GIG GC3, you must coordinate the physical swap of the module with the programming swap, which occurs on the Alarm.com server. Be sure to coordinate with your alarm dealer, and only physically swap the module once they have told you to do so.