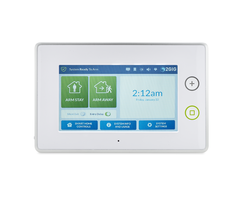 The GC3 is 2GIG's response to modern home security. From the makers of the first, and most disruptive self-contained security system ever built, the now-famous Go!Control 2, the 2GIG GC3 continues the tradition of user-centered security systems that are easy to use. This top-of-the-line hardware features some of the most innovative features ever seen on a home security system, rivaling any top-brand that exists in the space. Also worth mentioning is the incredibly close integration that 2GIG has built with Alarm.com, which allows users to control the system from their home or computer with incredible ease. The intuitive alarm.com app makes home security fun, simple, and very easily navigated by an end user which makes it perfect as a DIY panel.

The 7 inch capacitive screen makes for a responsive touch screen with large buttons so that anyone can use it. In addition, the unit has features that were loved on the old Go!Control such as one-touch arming. At a mere 1.25 inches, the GC3 is one of the thinnest high quality all-in-one system to have been sold to date. It's small profile means that it will sit on even the most discerning homeowner's wall without being an obtrusive eyesore.

Like the 2GIG Go!Control that came before it and unlike Honeywell's products, the 2GIG GC3 does not work without a cellular antennae installed in the unit. If you are in an area with special needs regarding wireless, you can choose between having the panel communicate over AT&T's 3G network, Verizon's CDMA network, Verizon's LTE network and Roger's GSM network (if you're in Canada). The snap-in radio antennas are easily installed without having to fully open the panel. There is no tool required, and it can be replaced if it ever goes bad without breaking the panel.

Like its Honeywell counterpart, the Lyric Controller, the GC3's firmware is upgradeable, which means that you will be able to enjoy the features of the system today and many more to come. This allows new features to be added to the system in just a few touches which means that the hardware might get older, but the software will ensure that your system is as up to date and running smoothly. To update the panel, one can use a USB port for fast on-site updates, or over the air with the right equipment.

While old security systems often gave end users a few zones due to hardware limitations, with the benefits of moving toward digital sensors and digital communication, modern security systems give end users more zone options. While Honeywell's L5210 and L7000 allow 64 and 79 programmable wireless zones respectively, the 100 wireless zones available for programming (the 2GIG Go!Control had only 60 wireless security zones). The panel also comes with the ability to program 32 key fobs, which is 8 times more than the GC2. Additionally, the GC3 can control up to 4 keypads, has 2 open collector outputs, a Bell Output for an external wired siren, as well as 2 wired zones in case you would like to use a few pre-existing wired door or window sensors. An additional feature that the 2GIG GC3 has that is also worth noting is the ability to add 100 users and to name them. While most systems, such as the LYNX Touch Series panels from Honeywell, do not allow you to name your sub users, and merely assign numbers to them, the GC3 actually allows you to add names into the panel that will let you keep track of exactly how the system is being used and by whom.