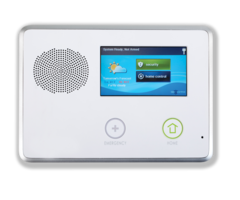 heyyo our is Dylan here with alarmgrid today we're gonna be going over how to use a 2gig system without monitoring now technically any system that you get can be used without monitoring what monitoring is it's basically just when you have the system sending out a signal to a central station or to a remote application if it's not being monitored the system is basically just a local noise maker so it's still gonna function you can still program it the same as you could if it was monitored it's gonna do the same exact thing the only difference just to state again it's not gonna send out a signal so there are some advantages and disadvantages to this so the disadvantages obviously if there is an emergency you're not getting the signal sent out to anyone so no one's gonna know that the alarm is going off no one's gonna know that you would need the authorities there unless of course you're called so basically it's just making noise possibly scaring away a burglar possibly like if your house is close enough to neighbors or if your sirens allowed enough neighbors could hear it possibly call the police for you but again that's you know kind of chancy on if they would or if they could hear it so it's gonna be basically the same when it is monitored beat either with remote application or Central Station difference is that a remote application will basically just alert you on your smartphone it'll send you an email a text alert push notification basically saying you know hey this alarm is going off this sensor is tripped in which case you would have to call the authorities or if it's monitored by a central station that signal was going out to operators whose job it is to basically taking the signal contact you or the authorities depending on the type of situation and then basically dispatch out for you and made sure that you're okay so with monitoring as well as non monitoring there are positives and negatives so the positives like I mentioned is obviously you're getting this sent out to someone who can call the authorities for you if it is an emergency situation and you're unable to do so yourself a disadvantage is that if there is no mergency your signal is still going out so if you accidentally come in the door accidentally trip off a panic don't disarm the system in time where the signal does go out Central Station has gotten the signal they're reacting contacting the authorities that's possibly a false alarm basically meaning no emergency but the alarm was slow tripped the authorities were still dispatched some areas do have permits for alarms that are monitored basically they're for the exact mentioned situation before or false alarms so if you have a false alarm that's the police using their time and resources to go out to the location to check on the system to check on the alarm make sure that there's no one on location you know secure the premises and all that for areas that have a high amount of those the police will issue permits so either they don't have to find you or the fine is drastically reduced if you do have a system that is monitored or if you're trying to get monitoring with a system we definitely recommend to check with your local police department eat beat either city or county where your limits lie and then check with them mention that you're gonna have a system that's gonna be monitored by a center station that can call the authorities if needed see if you need a permit or if you need to register the system that way you can get all your things in order so when you do get the system live if there is a false alarm you don't have to worry about being fined or being fined a high amount now that's essentially majority of what we can talk about I mean as mentioned just to go over it again the systems will operate the same so if I had my gc3 monitored not my GC to unmonitored functionality they're gonna do the same thing just as a reminder the GC 3 that's getting sent out somewhere that's gonna respond to the alarm well the GC 2 is just making noise if your neighbors are close enough and they hear the siren they can possibly call the authorities for you if you are on site and it's not you know such a dire emergency where you can't reach a phone you can contact the authorities as well but if this is the Miss monitor you don't have to worry about that it's getting sent out to someone so even if no one is hearing the siren or if there's no one around or if people just don't want to react you're still getting someone responding to that for you they're still gonna dispatch the authorities and then call and make sure you're okay for more questions about monitoring or if you're just introduced interested in more about how these systems work check out our website wwlp.com to be notified we release more content thank you very much enough great day