Grill automation devices help you save money and prevent fires in your home. These devices are installed on grill burners, and they let the panel know if someone accidentally leaves their burner in the ON position. You can also get alerts regarding your grills activity. Buy grill automation devices. 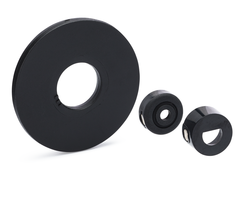 Grill automation devices make for a nice addition for any security system owner who like to regularly have barbecues and cook on a grill. These devices are often paired with alarm systems, and they are usually set to trigger a system trouble condition if activated outside of typical hours. End users will appreciate this, as it is a great way to know if a grill was ever left on by accident. If you leave a grill on, then it is a waste of money, and it could result in a fire. But with a grill automation device, you will not have to worry about this problem. We recommend pairing these devices with an interactive service platform and active alarm monitoring service so that you can receive alerts when your grill is left on.

A great aspect of grill automation devices is that they are are usually very simple to operate. This is true both for programming the grill automation device to the system and for physically installing it on the grill. You can have the device secured to a burner on your gas grill. The device will know to expect a certain rotation and placement when the grill is turned off. If your turn on the grill by rotating the burner, then the grill automation device will be faulted. Once the device is faulted, it will know to send an alert to the ways. Most users will configure these zones so that their systems only display trouble conditions for faults that remain in effect for a long period of time, or for faults that remain in effect during unusual hours.

Many users will have their systems set to activate notify end users regarding faulted grill automation zones based on time and/or duration. For example, you probably don't want to receive an alert every time you use your grill. You might only want to receive alerts for when your grill is activated past 9pm, or if your grill has been left on for more than an hour. Both of these scenarios indicate that something is likely wrong. For instance, activating your grill automation zone late at night may mean that you left your grill's propane tank open when you were cooking earlier. The same is true if the grill has been left ON for an extended period of time. A trouble condition is useful in these cases, as you will still have to acknowledge the problem even if the trouble is cleared.

Setting up an automation to have your system only alert you regarding grill activity during certain hours is often preferred. For example, you might only want to hear about your grill being active from 12am to 12pm. Activating the grill late at night or super early in the morning is probably unusual for your household. But you don't need to get alerts about your backyard barbecue you host at 4pm on a Saturday. Both Total Connect 2.0 and Alarm.com allow users to set up these smart notifications, so you can use your grill automation device the way that you want. Remember that you will need to choose a grill automation device that works with your system. If the sensor is wireless, make sure that it communicates at a frequency that is compatible with your alarm panel.